Is Siri the start of something grand? 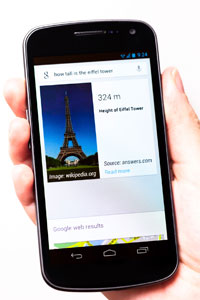 Google Voice Search – which can do much more than tell you the dimensions of the Eiffel Tower – is hoping to give Apple’s Siri a run for its money.
©iStockphoto.com/Giorgio Magini

Though Siri isn't quite up to the task of replacing our administrative assistants, it's also a pretty recent development, and the first voice assistant to reach such a wide commercial audience. Like the iPad did for tablets, Siri may have whetted the public's appetite for the computer assistant of the future.

Siri's not the only game in town. Google Voice Search was released for iPhone in an update to the Google Search app in October 2012. It's touted as being faster than Siri, although it is more of an information search feature and doesn't have all of Siri's integrated capabilities. You can also get Vlingo, Nuance's Dragon Go! and True Knowledge's Evi voice assistant apps for iPhone and other devices. They can perform some, though not nearly all, of Siri's functions, but they certainly lack her personality. One disadvantage of third-party apps is that they aren't integrated with iOS, so you can only use them while the app is open, not from anywhere as you can with Siri. Other platforms besides Apple's also have voice recognition software, including Samsung S Voice, Microsoft's TellMe and Android's Speaktoit, so iPhone is not the only choice. However, all current voice-recognition systems fall prey to similar accuracy issues, so there is no perfect assistant out there yet.

Some people have found Siri so disappointing that they've filed false advertising lawsuits against Apple, saying that their claims for Siri's capabilities were overblown. But despite its limitations, Siri is a pretty big step beyond what we've had before. There's no telling what useful features will be added in the future, or how smart and capable the app will grow as it's given more and more data. And as with all technology, it will likely only improve over time, and spawn more advancements we didn't even know we needed until they existed.

Siri might be our first big step toward the fully interactive talking computers of yesterday's sci-fi. We might be in for a glorious future of having advanced artificial intelligences do most of our busy work for us. And heck, with the right hack, they might even be able to make us coffee.

Ever since seeing the film "Wargames" when I was a kid, I've wanted a talking computer. And now, thanks to Siri and my iPhone, I have one in my pocket. The voice is even slightly electronic sounding and, thankfully, is unlikely to start a global thermonuclear war.

I actually told Siri, "Let's play global thermonuclear war," in my quest for silly requests, and it brought up a Wolfram|Alpha page that said, in print, "Input interpretation: How about Global Thermonuclear War? Result: Wouldn't you prefer a nice game of chess?" with a little info about the movie. I would have preferred to hear it spoken aloud, but it's really more important that Siri can give me the weather and send messages and set my alarm without me having to click through several steps in the Clock app.

There have been some misunderstandings between us, and I may never fully trust Siri to give me directions while I'm on the road after our recent, "No, Athens, not Evans," argument. But thankfully we are still on speaking terms. All in all, Siri is much more useful than not having speech-recognition. Using it may even improve my diction. And I have no doubt that it'll either get much better over time, or be usurped by the next great step in the technology. And hopefully, that won't be the predecessor to WOPR.