How can people use Siri? 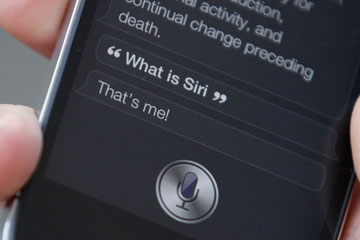 Siri’s not without a sense of humor.
©Oli Scarff/Getty Images

Surveys by Parks Associates in early 2012 found that most people were using Siri for basic tasks like texting, making calls and looking up information. Fewer were using it to set appointments and perform other more complicated duties [source: Vascellaro]. It can be a useful productivity tool, though, if you delve into its other functions. And even the simple stuff like making calls and taking dictation is usually in the realm of a human assistant, so those things can't be dismissed when gauging Siri's utility.

The app still can't replace a human assistant at this point, though, and is considered by some to be a novelty, at least in part because of its intermittent inaccuracy. But it should get better on the accuracy front over time.

Siri is fun to play with, in any case. You can ask it for all sorts of information, but you can also ask it questions that don't have concrete answers it can regurgitate from the Internet. These will sometimes yield one of the many witty "Easter Eggs" written into Siri.

Here are some of Siri's answers to the question, "What is the meaning of life?":

Other amusing questions and answers include:

This wasn't done to be frivolous, but to make Siri amusing and likable, qualities that make it less off-putting than a lot of other virtual assistants. Siri also tends to give different answers if you repeat the same question, to keep from being repetitive or annoying, like, for example, Microsoft's much despised Clippy AI assistant. You can't yet have a real human-level conversation with Siri, but you can at least have a pleasant interaction.

There's lots of hacking going on to make Siri capable of things well beyond her current scope. People have created things like Siri Proxy, a proxy server that allows you to build and run plug-ins to add custom features to Siri, to do things like manipulate devices remotely. Through such plug-ins, Siri has been used to start a car, control a TV, adjust a home thermostat and open a garage door via voice commands. Another plug-in called NowNow even lets you invoke a competitor of Siri, Google Voice Search, from anywhere in the operating system with the shortcut of your choice. But be forewarned, running third-party plug-ins requires jailbreaking your phone, which could render your phone inoperable.

Industrious users have also discovered useful hacks that don't require programming or jailbreaking. For instance, if you prefer the Google Maps app to Apple's built-in Maps, you can add "via transit" to your request for directions. Because Maps doesn't currently have transit directions, it will give you a list of all of your map applications and allow you to choose which you use. You can also create Phone contacts for locations you want to visit and add Google Maps URLs to them, then ask Siri to visit a contact's Web site.

One Siri user has managed to control lights in his house using Siri by plugging a lamp into a Belkin WeMo Switch (a WiFi enabled power outlet) and using an IFTTT.com account to set up a condition to turn it off whenever a text message is sent to a special phone number. He created a contact for the IFTTT number, and then could request that Siri send a text to toggle the lights via a simple command [source: Cipriani]. Other uses are bound to come to light as more people tinker with Siri.