What are Siri's limitations? 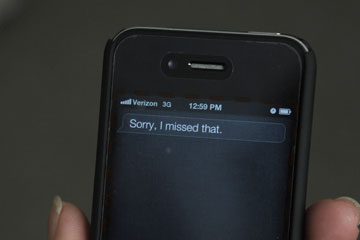 As cool as Siri is, it has a few shortcomings. Since being removed as a standalone app, Siri is only available on iPhone models 4S and above and newer models of iPad and iPod Touch, so anyone with an older phone or tablet who wishes to try out a voice assistant either has to upgrade or find an alternative to Siri.

There are also some limitations to its functionality. Because Siri is interacting with servers on the cloud, not just your smartphone's processor, WiFi or cellular connectivity is necessary. Siri also won't work very well if you end up in an area with weak cellular service.

There are some accent and language issues, as well. Siri is more likely to understand you if you speak very precisely, and it has trouble understanding some accents. So you might have to modulate your voice for better results, which might mean some people can't have natural-sounding conversations with the digital assistant. One reviewer found that Siri understood him best when he spoke to it in an inflectionless robot-like voice [source: Poeter]. Siri also has trouble with background noise and low quality audio from certain headsets.

Siri doesn't understand all spelling variations. It'll successfully match names like "Sarah" and "Sara" or "Jeff" and "Geoff," but less common names, or just variants that haven't been programmed into the app yet (even sometimes just one letter off), can cause headaches.

Even if you speak clearly and in a noise-free area, Siri can still misinterpret you in creative ways, such as picking the wrong homophone or just mishearing you and speaking back phrases that only sound vaguely like what you said. If you are in the same session and it does something like mishear a city name, it may keep using the same incorrect location information even if you try to correct it. Siri mimics intelligence pretty well, but in some ways it's kind of dumb. It can make for some frustrating conversations, but hopefully things will improve with more use and the passing of time.

Because of variations in human language, there are multiple ways of giving the same commands. Siri's learning skills aside, as you use it, you will learn what variations yield the best results. If you want hands free directions, but ask for something that returns multiple results, you will have to go through the list selection process and will likely have to touch or look at the screen at some point. But you can change something like, "Find McDonalds," which would return multiple hits in just about any city, to, "Give me directions to the nearest McDonald's," and Siri will find the closest one and jump right into your Maps app's spoken directions.

Even if you have "Raise to Speak" set in Siri's settings, it doesn't always activate when you raise your phone to your ear. You might still have to hold down the Home button, unless you discover the magic motion combination that always makes this feature work.

There is also one security issue with Siri, but it's easily fixable. Even if your phone is password protected, you can invoke Siri with the Home button. And in this state, it can be used to send messages and make calls to people in your contacts list without unlocking your phone. You can fix this by going to "Settings" > "General" > "Passcode lock" and setting Siri to "Off" under "Allow Access When Locked."

Unlike with many GPS devices, you can't pick and choose Siri's voice, so if you don't like the one that comes with your dialect, you're out of luck. If there happen to be multiple choices of dialect in your language, it can be fun to try another, but this can result in misunderstandings, as there are word definition and accent nuances between dialects. For instance, if you ask for football scores, the word "football" will mean different sports in the various English-speaking countries.

Because the Apple-integrated Siri of today doesn't pull data from as many sources as the original app, the information you get back may be more limited. It still can't order you a taxi. But Siri is young yet, and new features should be added with future iOS updates. And voice-recognition AIs are still not 100 percent accurate, so Siri is bound to disappoint at least some of the time. Frequent use is also likely to increase data usage, so users will have to keep an eye on their usage and limits.