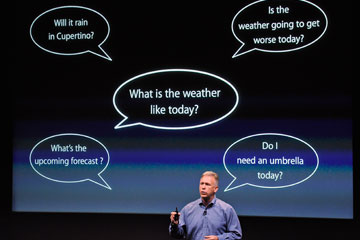 Speech-recognition for computers has existed for quite some time, and Siri isn't even Apple's first real foray into the technology. In the 1980s, you could buy – at a premium -- special software and hardware to make your computer respond to your voice. It required training the software to understand you and could only handle a small set of commands. This was great for hands-free computer control for people who needed it for accessibility reasons, but for most users it was impractical. In the early 1990s, Apple released Macintosh Quadra AV (audio-visual) computers that included built in speech-recognition software and hardware. They couldn't handle dictation, but you could open applications and perform a limited set of tasks via voice. And more recently, Mac OS X (as well as Windows Vista and other operating systems) has included integrated speech-recognition, but again, this is touted as an accessibility feature. Keyboard and mouse are still faster and more accurate input methods than voice for your home computer.

Other device manufacturers and software retailers have had speech-recognition applications on the market for a while, as well. Third-party apps like Nuance's Dragon Dictate and its newer Dragon NaturallySpeaking voice dictation applications have been available since the 1990s. We've been talking to automated phone systems for years (primitive ancestors of the more robust dictation and assistant programs of today). Voice-recognition technology is even being used for things like entry of patient information at hospitals. But most of these are still demonstrations of voice-recognition artificial intelligence (AI) in its infancy, able to only perform simple tasks like taking down what you say or responding to a limited number of preset commands.

Siri takes the technology quite a few steps further. It was originally a third-party app called Siri Assistant, released in 2010 and slated for release on other platforms, but Apple bought the company, removed it from the App Store and made it a proprietary feature fully integrated with the iPhone's operating system (iOS). The integrated app was in beta when it was first released in 2011 as part of iOS 5, but since its upgrades in iOS 6 (released in 2012), it is considered fully functional. Siri comes native on iPhone 4S and later, iPad with Retina Display, iPad Mini and the fifth-generation iPod Touch, but isn't available for prior models.

Siri isn't even the only game in town, but in some areas, she may be the best. Read on to find out more about this marvel of voice-recognition and artificial intelligence.