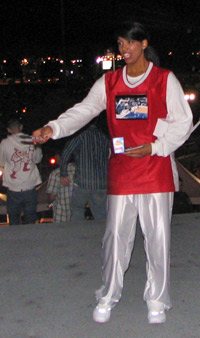 The shirts weigh about six and a half pounds. Because they use flat panel television screens, the shirts are a little bulky. Hollander created the shirts specifically for advertising, with no intention of offering them to the public, so comfort and practicality weren't of much concern in the design process. The components are also too expensive to sell T-Shirt TV clothing to the consumer market.

In addition to the screen and speaker system, the shirts need a portable power source -- usually in the form of a lithium-ion battery. It also needs a video source: a custom-built computer that can store and play digital media efficiently. Brand Marketers can incorporate the system into most types of clothes as well as include interactive features like a handheld touch-screen if clients request it. Currently, the systems can play any length of audio or video files separately or in a loop. Future versions of the shirt will include Bluetooth and WiFi capability, adding more interactive features to the clothing.

The marketing firm Adwalker offers a similar product: A portable, wearable computer system. A padded harness acts as the frame for the system, which includes a portable PC, computer monitor, a handheld touch screen and a printer. Clients can send Adwalker videos, software, logos and other computer files and Adwalker incorporates them into eye-catching presentations. An Adwalker employee wears the harness and interacts with the general public. Using this system, the Adwalker employee can:

A model wearing an AdWalker display interacts with the public.
Photo courtesy AdWalker

The system is bulkier than Adver-Wear, but it's even more interactive and has more functions than T-Shirt TV.

As advertising companies continue to search for new ways to grab our attention, we'll likely see more applications of fabric displays. We may even see applications where entire outfits act like a television screen, with images wrapping around from front to back.

To learn more about fabric displays and related topics, follow the links below.

Coming to a T-shirt Near You

Adver-Wear made a big splash during the promotional campaign for the Will Smith film "I-Robot." Models in several different cities wore Adver-Wear shirts with screens playing a looped preview for the film. The marketing campaign caught national news attention.