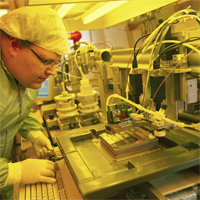 PLED stands for polymer light emitting diode, which is a technology used in backlighting, illumination and electronic displays. Unlike LEDs, which are small bulbs, a PLED display is a thin, flexible film made of polymers and capable of emitting the full color spectrum of light.

A PLED is constructed of several layers:

When the engineer applies an electric field between the two electrodes, the polymer emits light, much like an LED. Because the polymers in PLED are made of organic molecules, they are also known as OLEDs -- organic light emitting diodes. To learn more about how these diodes can emit light, read our article on How OLEDs Work.

Using a PLED screen, it would be possible to create a fabric television. PLED displays are very thin and relatively light compared to other display technologies. Of course, the screen is just one important element in the overall fabric display -- you would also need a power source, such as a lithium-ion battery, and a signal source. The signal source could be a small computer containing preloaded video clips or even a WiFi-enabled device that could stream audio and video directly to your clothes.

In the next section, we'll look at how an invention called T-Shirt TV works and the impact it's made on advertising.