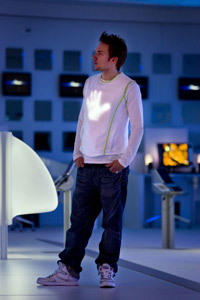 Light emitting diodes (LEDs) are tiny light bulbs designed to fit into electrical circuits. Unlike incandescent bulbs, LEDs don't use a filament to generate light. Instead, light is a byproduct of electron motion within semiconductor material. Electrons move from high energy states to lower ones, releasing photons in the process. LEDs take advantage of this, harnessing and focusing the photons into tiny light bulbs. The gap between the higher and lower states of energy determines the frequency of the photon, which we observe as a specific color of light.

Several companies sell clothes that use LEDs to create special patterns or messages. Most of these companies will alter regular clothing to include LEDs. For instance, if you want to turn your normal jacket into an advertisement for HowStuffWorks, you'd send the jacket and a description of what you wanted to the alteration company. A company employee would cut small holes in the jacket and fit an LED into each hole. Once assembled, the lights spell out your message. On the inside of the jacket, each LED attaches to a circuit board. Most companies cover the circuitry with a thin fabric lining. The employee then attaches a power source, usually a small battery pack that can fit into a jacket, shirt or pants pocket.

Other companies cover the LEDs with a thin fabric so that the plastic bulbs aren't visible. When turned on, the light shines through the thin cloth. Like electroluminescent clothing, clothes using LED technology must be carefully maintained and washed. Otherwise, the delicate circuitry could become damaged.

The circuitry controlling an LED display can be as simple as a power switch, meaning all the LEDs are either turned on or off, or it can include microprocessors, which let the wearer customize how the LEDs light on and off. This means that if a shirt has a block of RGB LED lights (LEDs that can emit any color of light), the wearer can create a program telling each LED when to turn on and off as well as what color it should be. By alternating colors and turning on and off, an LED fabric display can create simple images or messages. Each LED acts as a pixel, but because LEDs are much larger than television pixels, the resolution on an LED display won't be very sharp. Because of the low resolution, clothes with LEDs are best for simple messages or designs.

Using LED displays, you can have a preprogrammed light show on your clothing. But what if you want an even more impressive display? In that case, you'll need to look at technology that can display full moving pictures like television signals.

In the next section, we'll learn more about one of these technologies -- PLEDs.