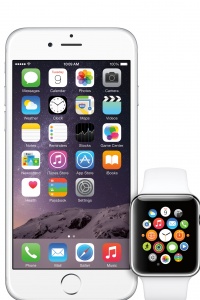 The basic communication features you’re used to seeing on an iPhone are all present on the Apple Watch.
Image courtesy of Apple, Inc.

Apple Watch has some interesting features outside of its basic functionality. One that Apple calls Handoff lets you start an action on one device and complete it on another, such as read an e-mail on the Watch and respond on the iPhone, or start typing a message on one and complete it on the other.

Notifications will bring up quick button choices that are relevant in the context of the app. When you get a Calendar invitation, you will have these choices: Accept, Maybe, Decline and Dismiss. When a call comes in, you get the expected decline or accept icons. When you receive text messages, the message will be analyzed to generate something called Smart Replies. For instance, if someone types, "Do you want fish or steak for dinner?," virtual buttons that read "Fish" and "Steak" may appear on the screen, and you can press one to send that reply. An example from the keynote was a message that said, "Are you going with 'Love Shack' or 'Wild Thing'?" The possible response choices that came up were "Love Shack," "Wild Thing" and "Not sure." The choices depend on the content of the previous message. You can also hit a dictation icon to speak a message to send via audio or translate into text. Hit a smiley face icon and choose from hand, heart and face animated emojis. It will even let you modify the emojis via touch before sending.

A feature Apple calls Digital Touch will give you new ways to quickly communicate with friends who also own the Watch. To use it, you press the button below the crown, which brings up your friends, and tap on someone's icon. It will show your friend's picture and name along with tiny phone and message icons. If you tap on the middle of the screen instead of selecting one of those icons, the screen will go black except for a dot near the top. You can then communicate with your chosen friend by tapping the screen (which will cause their watch to tap them) once or a number of times, drawing little sketches with your finger or pressing two fingers to the screen to send a snippet of your heartbeat, which the recipient will feel on their wrist. To change the drawing color, you can tap on the dot to bring up the color picker and select between white, red, pink, orange, green, yellow and blue. You can also exchange audio messages through the Walkie Talkie function.

The Watch can also be used as a remote to control music on your iPhone, Apple TV and iTunes on your computer. You can even use it to see what's on the viewfinder on your iPhone camera and set a timer or hit the shutter button to snap a picture. As mentioned before, you can store music on your watch so that you can listen to it even if you leave your phone at home. You would just need Bluetooth headphones if you didn't want to blast your tunes to the world, since the Watch has no connectors.

You can also access some simple settings to turn Bluetooth or Airplane Mode off or on and set Do Not Disturb. And it allows you to ping your iPhone if you can't find it.

As you might expect from a computer in watch form, the Watch also has some robust Timer, Alarm and Stopwatch apps. But those aren't the only apps you can take advantage of on your Watch.