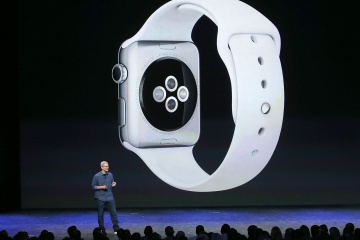 The slide above Apple CEO Tim Cook shows the Digital Crown on the side of the Watch and the buttons and the back of the device.
© Justin Sullivan/Getty Images

Apple employed metallurgists to make the metal alloys of the watch cases as strong as possible. The anodized aluminum of the Sport model is reportedly 60 percent stronger than traditional aluminum alloys, and the gold of the Edition model is twice as strong as normal gold.

On the right side of the device (if looking at the watch face) is a knob Apple refers to as the Digital Crown. It looks like the crown you would use to wind or set the time on a traditional analog watch, but on Apple Watch, it acts as an input device that allows you to scroll through or zoom into or out of whatever is showing on the screen. You can also press it like a button, which usually takes you to the home screen. How it behaves will depend upon context, but the Digital Crown allows navigation without blocking your view of the screen's content with your fingers.

An oblong button below the crown is used to bring up contacts (called Friends) with a single press, and for using Apple Pay -- Apple's new near field communication (NFC) enabled payment method -- with a double press.

Two small buttons on the back can be used to remove or re-attach the watch bands.

The touchscreen is a flexible Retina display. In the case of Watch and Watch Edition, it's protected by a single crystal of machined, polished sapphire, which is the second hardest transparent material next only to diamond, according to Apple. The Sport model is protected by Apple's custom Ion-X glass, a scratch and impact resistant aluminosilicate glass, strengthened at the molecular level by replacing smaller ions with larger ones. Ion-X stands for "ion exchange."

The display senses touch as you would expect on any touchscreen device, but small electrodes were incorporated which allow it to also sense force (something Apple has dubbed Force Touch). As a result, the touchscreen can distinguish between a press and a tap and act accordingly.

The Watch's sensors include an accelerometer and gyroscope to detect movement. Also, at the back of the watch (the part that touches your wrist), there's a heart rate sensor covered in ceramic and zirconia and made up of photodiodes and infrared and visible-light LEDs that fire through four sapphire lenses.

The Watch is powered by an entire computer system on a single custom chip which Apple has labeled the S1 SiP (System in Package). It's enclosed in resin to protect it from impact, moisture, dust, dirt and wear. According to Apple, their full single-chip computer system is an industry first. Per Tim Cook, it has several hundred components wrapped into it [source: Rose].

Another internal component is something Apple is calling the Taptic Engine, a linear actuator that, along with the speaker driver, produces haptic feedback to give tactile cues when a call or notification comes in or an action is performed.

The device includes WiFi 802.11b/g and Bluetooth 4.0 for communication with iPhone. It also incorporates some form of near field communication (NFC).

The device does not appear to include a camera, but it does have a speaker and microphone.

You charge the Apple Watch with a small metal inductive charging unit that's attracted to the back of the watch via magnets using Apple's MagSafe technology. There are no exposed connectors on the watch or the charger.

There's no word yet from Apple about the specifics of the battery life. Apple CEO Tim Cook stated that users would want to charge them every night like a lot of people do with their phones [source: de Looper].

The Watch relies on your iPhone's GPS to get location information, along with the phone's connection to the Internet through cellular or WiFi for most of its other functions. It can reportedly store and allow independent replay of some of your music so that you can jog to your tunes without your phone, but for the most part, you need to carry your phone to use the Watch.