When the Sweat Dries 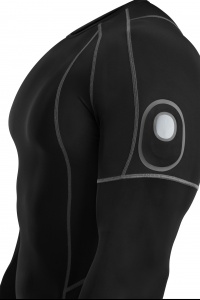 A small pouch on the side of the garment holds the core unit.
Image courtesy of Athos

The Athos sensors are simply instruments for measuring your movements. To tie the system together and process that sensor data, you also need what Athos calls its core unit. The $199 core unit is the system hub, a 2.5-inch (6.4-centimeter) long oval plastic doodad that slips into a slender pouch on either the shirt or shorts.

The core is what contains the accelerometers, as well as a gyroscope, which picks up movements (such as rotation) that the accelerometers can't. It's also outfitted with a Bluetooth adapter that lets it transmit data to your smartphone. The rechargeable battery lasts about 10 hours, which for most people is long enough for a week of workouts (or more if you decide to start slacking off).

Athos is by no means the only high-tech fitness clothing on the market. The Move Pilates tank top uses tiny actuators to nudge your body into the proper form during a Pilates workout. Hexoskin is one of the most established and advanced garments around, and it tracks more metrics, such as breathing volume, cadence, VO2 max, heart-rate variability and a whole lot more — and at around $400, it costs more, too. Bigger companies are also getting into the game. Ralph Lauren sells a shirt that detects heart and breathing rate, among other factors.

Almost all of the current generation of smart fabrics, including the Athos line, are machine washable. That's a key condition for many people, because consumers don't want to alter their laundry schedule just for one piece of clothing.

It's also important to note that the Athos garments are in line with clothing trends. They look like most contemporary compression outfits, albeit ones with a few extras to accommodate sensors and the core unit.

The Athos system is an example of just how far fitness trackers have come, and a sign of just how much more sophisticated they'll become in the future. If the Athos inventors have their way, personal trainers could see their job security waning as digital assistants take over the heavy lifting in monitoring and advising your workouts.

I'm not a gym rat, and I don't see the appeal of maximizing every bench press and squat. I do, however, occasionally wind up with nagging injuries, and I worry about favoring sore muscles at the expense of healthy ones — overcompensating for a sore spot can lead to all sorts of new problems. Using tracking devices to monitor muscle use could keep me mindful of my body's limitations and prevent new injuries, leading to a better, happier body. For anyone who works out regularly, that's a smart investment that can actually benefit your quality of life as a whole.