Browse the article What's the difference between quartz and liquid crystal? 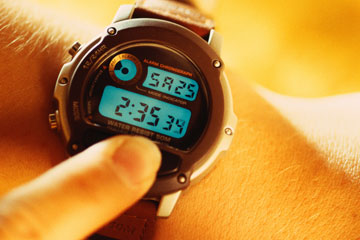 How do quartz and liquid crystal make your watch tick?
Stockbyte/Getty Images

When you glance down at your watch, you're probably not thinking about how different quartz and liquid crystal are from one another. And you probably shouldn't -- by the time you're done ticking off their contrasts, you might be late to your next appointment. But while quartz and liquid crystal aren't even in the same state of matter, they have one important commonality: the average digital watch or clock won't work properly without them.

Before we contrast their functions inside of a watch, let's look at some of the properties of each substance. Quartz is one of the most abundant minerals found on the surface of the earth. Known by the chemical name silicon dioxide, quartz is a crystalline solid used as a component in jewelry and sandpaper. Quartz crystals are also a common component in devices like cell phones, television receivers, and, of course, watches and clocks. One of the main reasons quartz is used in so many electronic devices is because it is piezoelectric, meaning it generates an electric charge when pressure is exerted upon it. Quartz also demonstrates a reverse piezoelectric effect: When an electric charge is applied to a quartz crystal, it begins vibrating. As we'll see, these attributes become very important when it comes to keeping time.

Liquid crystals, on the other hand, are not a singular substance. First discovered in the 19th century by scientists trying to determine the molecular weight of cholesterol, liquid crystals are actually a classification of compounds that comprise a fourth state of matter: The rod- or plate-shaped molecules in liquid crystals tend to flow like liquids, but maintain the alignment and order seen in solids [source: Nobelprize.org]. You've probably noticed that LCDs -- also known as liquid crystal displays -- are commonplace in computers, televisions and a host of other pieces of technology. That's because liquid crystal molecules have optic properties that can affect light when it passes through them. The first watch with a liquid crystal display appeared in 1973 [source: The New York Times].

Now that we know about the different properties of quartz and liquid crystal, let's look at how each of them functions inside of a watch.

The Role of Quartz

Let's review the basic components that a watch or clock needs to work correctly:

Remember that we're talking specifically about digital quartz watches and clocks. These are different from the mechanical watches that must be wound regularly and do not usually incorporate quartz, and they're different from the analog watches and clocks that use gears to drive the hands along a face, which typically don't incorporate liquid crystals.

Quartz functions as the timekeeping mechanism. First introduced into watches by Seiko in 1969, quartz crystals have become standard for modern watch manufacturers in the decades since [source: Seiko]. The quartz used in watches vibrates at a very high frequency. This translates to great accuracy: The time displayed on a quartz watch might deviate from real time by just a few seconds in a given month [source: Lombardi]. Additionally, because quartz is piezoelectric, it requires very little power to vibrate, enabling a single alkaline battery to power a quartz watch for years on end.

While the watch industry standardizes quartz oscillators to vibrate 32,768 times per second, the reality is that the oscillator vibrates a little more or a little less, depending on the temperature and pressure in the environment. While the watch is still accurate enough for everyday use, more or fewer vibrations can translate to deviations from real time of several seconds each month [source: Woodford].

The Role of Liquid Crystal 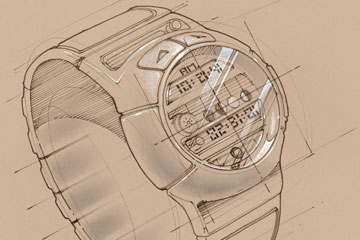 LCDs on watches are divided into seven- or 14-segment sections, which display those familiar numerals.
Stockbyte/Getty Images

We mentioned earlier that liquid crystals have optic properties that make them a favored component of LCD screens. Liquid crystal substances are classified on a spectrum between solid and liquid, depending on their individual characteristics. The most common type of display used for LCD screens on a digital watch is called a twisted nematic (TN) display. The molecules that make up the liquid crystal in this display are arranged in a twisted, spiral shape. But the chemicals can be untwisted by applying an outside force -- like an electrical pulse -- which will affect the light passing through them.

When the integrated circuit releases those electric pulses after every second, minute, hour and other intervals measured by the quartz oscillator, it communicates with the LCD to turn parts of the LCD on and off. The LCD is divided into a series of seven- or 14-segment sections, and each seven-segment section conveys a numeral zero through nine. The combination of sections can reveal the passage of time from 12:15 to 12:16, for example, or 1:00 to 2:00. (By virtue of having more cells, 14-segment sections can reveal letters as well as numbers.)

As you can see, quartz and liquid crystal are very different substances serving very different purposes when it comes to keeping time. But without both of them working together, we'd probably be running late.

The biggest surprise during my research for this story was the paradox: Liquid crystals and quartz have almost nothing in common, but within the guts of a wristwatch, they depend on one another. I guess I never considered this, because I haven't worn a watch in years (as long as I have my iPhone, I probably never will again). But it's striking to know now that, whenever I encounter someone sporting a quartz watch, time is dictated by thousands of micro-vibrations a second; that we recognize the forward shift because light passes through filters; and that this is all going on completely out-of-sight, yet so close to us in a simple piece of technology that we take for granted. It makes me wonder what's inside my garage door opener.