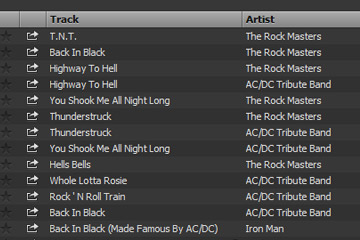 Although you'll find lots of cover versions, there aren't actually any songs by the band AC/DC available on Spotify.
Screenshot by HowStuffWorks.com

Spotify's biggest strength is simple: It lets you play just about any song instantly without having to purchase or download it from a legal (or not-so-legal) source. But there are some drawbacks, too.

Licensing conflicts continue to hamper the experience for some users. Although Spotify likes to brag about its huge library, your impression of the catalog's completeness will depend entirely on your music tastes. For example, as of this writing, you won't find artists like Pink Floyd, AC/DC, Led Zeppelin, Metallica or the Beatles in the catalog (in general, the Spotify library is a very fluid thing, with songs' availability dependent on the whims of artists and record companies). If you have offbeat or even slightly eclectic music preferences, you might find that to Spotify, your favorite musicians simply don't exist.

Plus, many bands allow playback of only parts of their discography, so you may find a few songs by North Mississippi Allstars, but you'll be out of luck on many of their tunes. And if you're not already familiar with their back catalog, you might miss out on their best music.

Sometimes, an album will be missing only one or two songs, which are shaded in the song list. Try to play those tunes, and you'll see a message that says, "The artist/label has chosen to make this track unavailable. If you have the file on your computer you can import it." Instances like this could make it difficult to create complete, comprehensive playlists in Spotify.

If you upgrade to the paid services, you'll be paying every month regardless of whether you use the service or not. At $120 per year for the Premium service, that's roughly 10 to 12 albums you could buy from a vendor and actually own, instead of pushing money into Spotify's service, from which you basically rent your music (unless you decide to buy tracks from the company).

And if you like the feeling of supporting your favorite bands financially, it's worth noting that artists receive a higher cut of dough if you simply buy their album instead of paying Spotify to stream it to you. In one oft-cited example, Lady Gaga pocketed only $167 for roughly 1 million plays of her hit song "Poker Face" on Spotify [source: Guardian].

On the other hand, Spotify is renowned for helping people find alternate or cover versions of their favorite songs. Type in "Folsom Prison Blues," and you'll see live versions and covers by other well-known (and not-so-well-known) musicians. In fact, one of the company's big strengths is that its reach helps lesser-known artists expose the broader world to their brand of music.

Unlike Pandora, Spotify lets you skip an unlimited number of songs, so you can always bypass the stuff that doesn't appeal to you without any hesitation. However, Spotify doesn't automatically build playlists based on your preferences, although you can connect your Spotify account to Last.fm. Spotify uses this integration to learn which songs you like best.

Spotify is jammed with other features that we haven't covered yet. On the next page, we'll give you some tips on how to access the best of this service to keep the beat thumping and your toes tapping.