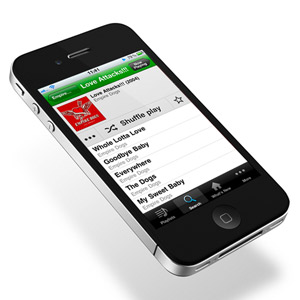 If you pay for a Premium Spotify account, you can play any Spotify songs anywhere you go. With a free account, you can only stream songs at your home computer and for a limited amount of time.
Image courtesy of Spotify

Most Internet music players work in a similar fashion: You pick a musician or song and then the site begins streaming the song's data to your computer. From both a technological and end-user perspective, this feat has some drawbacks.

With a less-than-speedy Internet connection, the high amount of data involved in streaming audio playback results in pauses, skips and, sometimes, complete stops. This exasperation alone will drive you, screaming and in tears, back to your CD collection.

Spotify uses some nifty tricks to avoid playback errors. Instead of constantly bogging down its own company computers and Internet bandwidth to send songs to millions of end users, it relies heavily on a peer-to-peer (P2P) network to stream audio, which works in the same decentralized manner of infamous torrent sites such as the Pirate Bay and Kazaa.

When you select a song, Spotify's computers immediately begin sending the data to your computer. Simultaneously, it looks for other Spotify users who have the tune on their computers. When it finds the track, it commands the Spotify software to send bits of the song to your computer, all of which takes a load off of Spotify's central servers and Internet connection. Spotify doesn't publicize how much data it acquires from individual users to help feed the P2P network, but in most cases, it's unlikely you'll notice any lag in your Internet speeds as a result.

Spotify uses another trick to keep playback speedy. It caches (or stores) the songs you listen to most right on your hard drive, which means your computer plays the song instead of Spotify. You can adjust the size of the cache, but by default, it's set to a hefty 10GB, enough room for hundreds of tracks. That's in addition to the specific songs you download with a Premium account, by the way.

What's more, Spotify is smart. The site knows that most of its users listen to albums from beginning to end, so if you start playing the first song of DJ Shadow's latest album, Spotify beings preloading subsequent tracks, too, so that you never experience playback delays.

All songs streamed from Spotify sources are in the Vorbis format. Like MP3s, this format is compressed to make for smaller, more easily transferred files. Most songs stream at about 160kbps (kilobits per second), although many songs available to Premium users stream at a higher-quality 320kbps.

Geek-speak aside, Spotify obviously offers a lot of different ways to play a huge variety of music. But is this really a panacea for all things in the digital music revolution? Keep reading to discover how Spotify stacks up to other services -- and how in some cases, it might not measure up to the competition.