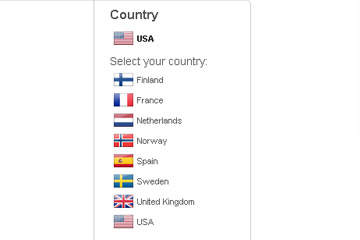 As of October 2011, Spotify is only available in these areas of the world.
Screenshot by HowStuffWorks.com

Spotify isn't a new technology. It's actually been around since 2008, when a company named Spotify AB launched the Spotify service in Sweden. Since then, the company has been negotiating licensing issues and slowly rolling out to other countries, including Finland, the United Kingdom, France, the Netherlands, Spain and, as of July 2011, the United States.

Given the country's technological history, it's no surprise that Spotify emerged from Sweden. The Swedes have one of the fastest broadband Internet systems in the world, as well as some liberal attitudes toward copyright laws.

It's partly those reasons that the Pirate Bay, a Web site that provides file-sharing links (many of which lead to stolen copyrighted material), started in Sweden. It isn't that Swedes are predisposed toward thievery; it's that their super-fast Internet and tech-savvy lifestyles have created an expectation for instant access to any material they desire.

Pirate Bay helped to foster that mentality, but Spotify hopes to legalize it. Spotify actually borrows many of Pirate Bay's technologies to share music. Only with Spotify, the record companies (many of them, anyway) have given Spotify their blessing to share music, so long as they receive revenue. And Spotify, of course, garners much of its income from the advertisements it streams during commercial breaks (more on this later).

Spotify is a hard sell in some areas, such as America, where music labels are reluctant to let online entities share their catalogs. After lengthy negotiations, however, all four major labels (EMI Group, Universal Music Group, Sony Music Entertainment and Warner Music Group) signed on to let Spotify share music with its users.

As Spotify continues to spread a legitimate alternative to illegal-file sharing, the company might just become the next big thing in the digital music revolution. It offers people instant access to specific songs, from just-released electronic trance tracks to 1920s jazz, and much, much more. It does so without placing huge demands on users' pocketbooks and without the weight of conscience for those who had resorted to illegal music pirating.

Just how the company pulls off this feat is another story altogether. On the next page, you'll see exactly how Spotify works -- and how the company wants to make you forget about CDs, tapes and other digital music services, forever.