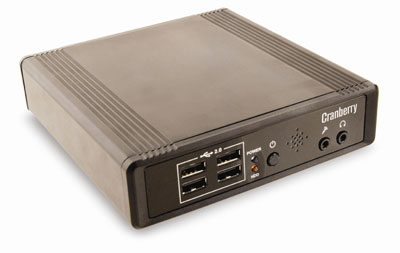 Even the most energy-hungry home computer doesn't make much of a dent in the monthly electric bill. If you ran a desktop computer and monitor at full power for eight hours every day, it would add $30 to your annual energy costs [source: myGreenElectronics].

But imagine that you owned a business with hundreds of employees. Now imagine all of those desktop computers crowded into an office, plus the servers and storage units crammed into IT rooms. Not surprisingly, those computers eat up a lot of energy, accounting for up to 70 percent of a company's energy bill [source: Cranberry]. Computers also create heat and force the air conditioning to work even harder to keep the office cool.

Recently, several computer makers have introduced machines designed specifically to lower the energy costs of small and large businesses. One is the Earth PC and Earth Server by Tech Networks of Boston. These new PCs come with a patented power management system that keeps machines running as lightly as possible in standby mode. They also come with 80 Plus-certified power supplies which keep them cool and lower air conditioning bills by 33 percent in the process [source: Tech Networks of Boston].

The Cranberry SC20 is another new energy-conserving computer marketed toward businesses. The Cranberry isn't exactly a PC. Instead, it's something in between a full-fledged PC and what's known as a thin client. Thin clients are pared-down computer terminals that run all of their applications from a central server. Thin clients don't have hard drives and can't run their own native applications. The Cranberry is called a "Smart Client" because it's slim (the size of a paperback book), yet it can run its own software, be controlled locally and includes standard ports for connecting digital cameras, speakers and other devices. Because the applications reside on the Internet rather than on the machine, this is a form of cloud computing.

But the impressive thing about the Cranberry is that it uses just 10 percent of the power of a standard PC. That's because it has no moving parts (no fans or hard drive) and is powered by an extremely efficient microprocessor. The Cranberry consumes a mere 9 watts compared to a standard PC which burns through 175 watts [source: Cranberry].

The Mac Mini is another desktop computer touted for its energy efficiency. The Mini is a tiny 6.5-inch (16.5-cm)-square, white box with a built-in CD/DVD drive and the standard input/output jacks for USB and Firewire devices. But since it's stuffed with highly efficient notebook computer guts -- and has an external power supply -- it runs quiet and cool at only 25 watts. The latest Mac Mini meets Energy Star 4.0 standards and earned an Electronic Product Environmental Assessment Tool (EPEAT) Silver rating.

In terms of computer monitors, smaller LCD monitors are more energy efficient than CRT monitors of the same size -- some reports say 66 percent more efficient [source: flatpaneltv.org]. LCD monitors also give off less heat than CRTs and help save money on that air-conditioning bill.

Now let's look at some cool new handheld gadgets that keep going long after everyone else's batteries are drained.