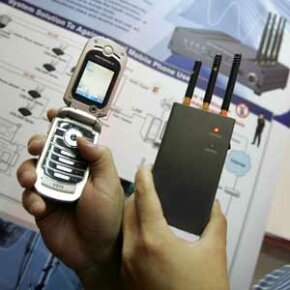 ­Cell phones are everywhere these days. According to the Cellular Telecommunications and Internet Association, almost 195 million people in the United States had cell-phone service in October 2005. And cell phones are even more ubiquitous in Europe.

It's great to be able to call anyone at anytime. Unfortunately, restaurants, movie theaters, concerts, shopping malls and churches all suffer from the spread of cell phones because not all cell-phone users know when to stop talking. Who hasn't seethed through one side of a conversation about an incredibly personal situation as the talker shares intimate details with his friend as well as everyone else in the area?

­While most of us just grumble and move on, some people are actually going to extremes to retaliate. Cell phones are basically handheld two-way radios. And like any radio, the signal can be disrupted, or jammed.

In this article, you'll see how cell-phone jammers work and learn about the legality of their use.

Disrupting a cell phone is the same as jamming any other type of radio communication. A cell phone works by communicating with its service network through a cell tower or base station. Cell towers divide a city into small areas, or cells. As a cell-phone user drives down the street, the signal is handed from tower to tower.

A jamming device transmits on the same radio frequencies as the cell phone, disrupting the communication between the phone and the cell-phone base station in the tower.

It's a called a denial-of-service attack. The jammer denies service of the radio spectrum to the cell-phone users within range of the jamming device.

Jamming devices overpower the cell phone by transmitting a signal on the same frequency and at a high enough power that the two signals collide and cancel each other out. Cell phones are designed to add power if they experience low-level interference, so the jammer must recognize and match the power increase from the phone.

Less complex devices block only one group of frequencies, while sophisticated jammers can block several types of networks at once to head off dual-mode or tri-mode phones that automatically switch among different network types to find an open signal. Some of the high-end devices block all frequencies at once, and others can be tuned to specific frequencies.

To jam a cell phone, all you need is a device that broadcasts on the correct frequencies. Although different cellular systems process signals differently, all cell-phone networks use radio signals that can be interrupted. GSM, used in digital cellular and PCS-based systems, operates in the 900-MHz and 1800-MHz bands in Europe and Asia and in the 1900-MHz (sometimes referred to as 1.9-GHz) band in the United States. Jammers can broadcast on any frequency and are effective against AMPS, CDMA, TDMA, GSM, PCS, DCS, iDEN and Nextel systems. Old-fashioned analog cell phones and today's digital devices are equally susceptible to jamming.

The actual range of the jammer depends on its power and the local environment, which may include hills or walls of a building that block the jamming signal. Low-powered jammers block calls in a range of about 30 feet (9 m). Higher-powered units create a cell-free zone as large as a football field. Units used by law enforcement can shut down service up to 1 mile (1.6 km) from the device.

The Appearance of Jamming

Some cell-phone jammers are made to look like actual phones. Others are briefcase-sized or larger.

The biggest jammers used by police and the military can be mounted in vehicles for convoy security.

Electronically speaking, cell-phone jammers are very basic devices. The simplest just have an on/off switch and a light that indicates it's on. More complex devices have switches to activate jamming at different frequencies. Components of a jammer include:

Every jamming device has an antenna to send the signal. Some are contained within an electrical cabinet. On stronger devices, antennas are external to provide longer range and may be tuned for individual frequencies.

The main electronic components of a jammer are:

Smaller jamming devices are battery operated. Some look like cell phone and use cell-phone batteries. Stronger devices can be plugged into a standard outlet or wired into a vehicle's electrical system.

Cell phone jamming devices were originally developed for law enforcement and the military to interrupt communications by criminals and terrorists. The bombs that blew up commuter trains in Spain in March 2004, as well as blasts in Bali in October 2002 and Jakarta in August 2003, all relied on cell phones to trigger explosives. It has been widely reported that a cell-phone jammer thwarted an assassination attempt on Pakistani President Musharraf in December 2003. When President Bush visited London in November 2004, it was reported that British police considered using jammers to protect the president's motorcade through London.

During a hostage situation, police can control when and where a captor can make a phone call. Police can block phone calls during a drug raid so suspects can't communicate outside the area. Cell-phone jammers can be used in areas where radio transmissions are dangerous, (areas with a potentially explosive atmosphere), such as chemical storage facilities or grain elevators. The TRJ-89 jammer from Antenna System & Supplies Inc. carries its own electrical generator and can block cellular communications in a 5-mile (8-km) radius.

Corporations use jammers to stop corporate espionage by blocking voice transmissions and photo transmissions from camera phones. On the more questionable end of the legitimacy spectrum, there are rumors that hotel chains install jammers to block guests' cell-phone usage and force them to use in-room phones at high rates. 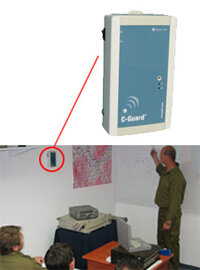 In the United States, United Kingdom, Australia and many other countries, blocking cell-phone services (as well as any other electronic transmissions) is against the law. In the United States, cell-phone jamming is covered under the Communications Act of 1934, which prohibits people from "willfully or maliciously interfering with the radio communications of any station licensed or authorized" to operate. In fact, the "manufacture, importation, sale or offer for sale, including advertising, of devices designed to block or jam wireless transmissions is prohibited" as well.

Jamming is seen as property theft, because a private company has purchased the rights to the radio spectrum, and jamming the spectrum is akin to stealing the property the company has purchased. It also represents a safety hazard because jamming blocks all calls in the area, not just the annoying ones. Jamming a signal could block the call of a babysitter frantically trying to contact a parent or a someone trying to call for an ambulance.

The Federal Communications Commission is charged with enforcing jamming laws. However, the agency has not yet prosecuted anyone for cell-phone jamming. Under the U.S. rules, fines for a first offense ca­n range as high as $11,000 for each violation or imprisonment for up to one year, and the device used may also be seized and forfeited to the government.

In most countries, it is illegal for private citizens to jam cell-phone transmission, but some countries are allowing businesses and government organizations to install jammers in areas where cell-phone use is seen as a public nuisance. In December 2004, France legalized cell-phone jammers in movie theaters, concert halls and other places with performances. France is finalizing technology that will let calls to emergency services go through. India has installed jammers in parliament and some prisons. It has been reported that universities in Italy have adopted the technology to prevent cheating. Students were taking photos of tests with their camera phones and sending them to classmates.

With phones ringing in movies, weddings and classrooms, it's no wonder people want to tone down the intrusion. So what legally can be done to stop annoying cell-phone use?

Cell-phone users don't know they're being jammed. The phones just indicate that there's no service or no signal from the network. The jammer simply interrupts the phone's ability to establish a link with the nearest cell-phone tower.

While the law clearly prohibits using a device to actively disrupt a cell-phone signal, there are no rules against passive cell-phone blocking. That means using things like wallpaper or building materials embedded with metal fragments to prevent cell-phone signals from reaching inside or outside the room. Some buildings have designs that block radio signals by accident due to thick concrete walls or a steel skeleton.

Companies are working on devices that control a cell phone but do not "jam the signal." One device sends incoming calls to voicemail and blocks outgoing calls. The argument is that the phone still works, so it is technically not being jammed. It is a legal gray area that has not been ruled on by the FCC as of April 2005.

Cell-phone alerters are available that indicate the presence of a cell-phone signal. These have been used in hospitals where cell-phone signals could interfere with sensitive medical equipment. When a signal is detected, users are asked to turn off their phones.

For a less technical solution, Coudal Partners, a design firm in Chicago, has launched the SHHH, the Society for HandHeld Hushing. At its Web site, you can download a note to hand to people conducting annoying cell-phone conversations, expressing your lack of interest in what they're talking about.

For more information on cell-phone jamming and related topics, check out the links on the next page.

Shopping for a New Cell Phone?