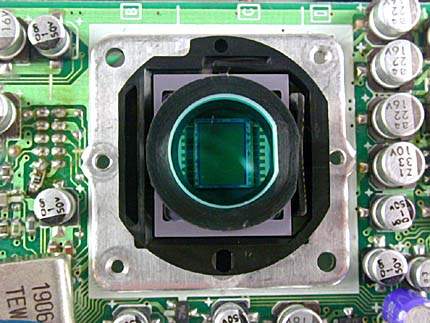 Like a film camera, a camcorder "sees" the world through lenses. In a film camera, the lenses serve to focus the light from a scene onto film treated with chemicals that have a controlled reaction to light. In this way, camera film records the scene in front of it: It picks up greater amounts of light from brighter parts of the scene, and lower amounts of light from darker parts of the scene. The lens in a camcorder also serves to focus light, but instead of focusing it onto film, it shines the light onto a small semiconductor image sensor. This sensor, a charge-coupled device (CCD), measures light with a half-inch (about 1 cm) panel of 300,000 to 500,000 tiny light-sensitive diodes called photosites.

Each photosite measures the amount of light (photons) that hits a particular point, and translates this information into electrons (electrical charges): A brighter image is represented by a higher electrical charge, and a darker image is represented by a lower electrical charge. Just as an artist sketches a scene by contrasting dark areas with light areas, a CCD creates a video picture by recording light intensity. During playback, this information directs the intensity of a television's electron beam as it passes over the screen.

Of course, measuring light intensity only gives us a black-and-white image. To create a color image, a camcorder has to detect not only the total light levels, but also the levels of each color of light. Since you can produce the full spectrum of colors by combining the three colors red, green and blue, a camcorder actually only needs to measure the levels of these three colors to be able to reproduce a full-color picture.

How the three colors mix to form many colors

How the original (left) image is split in a beam splitter

This simple method produces a rich, high-resolution picture. CCDs are expensive and eat lots of power, however, so using three of them adds considerably to the manufacturing costs of a camcorder. Most camcorders get by with only one CCD by fitting permanent color filters to individual photosites. A certain percentage of photosites measures only levels of red light, another percentage measures only green light and the rest of the photosites measure only blue light. The color designations are spread out in a sort of grid (the Bayer filter below is a common configuration), so that the video camera computer can get a sense of the color levels in all parts of the screen. This method requires the computer to interpolate the true color of light arriving at each photosite by analyzing the information received by the other photosites in the vicinity. For a full explanation of this process, check out How Digital Cameras Work: Capturing Color.

If you've read How Digital Cameras Work, then all this has probably been familiar to you -- camcorders and digital still cameras both take pictures using CCDs. But since camcorders produce moving images, their CCDs have some additional pieces you won't find in digital camera CCDs. To create a video signal, a camcorder CCD must take many pictures every second, which the camera then combines to give the impression of movement.

If you've read How Television Works, you know that a television "paints" images in horizontal lines across a screen, starting at the top and working downward. TVs actually paint every other line in one pass (this is called a "field") and then paint the alternate lines in the next pass. To create a video signal, a camcorder captures a frame of video from the CCD and records it as the two fields. The CCD actually has another sensor layer behind the image sensor. For every field of video, the CCD transfers all the photosite charges to this second layer, which then transmits the electric charges at each photosite, one by one. In an analog camcorder, this signal goes to the VCR, which records the electric charges (along with color information) as a magnetic pattern on videotape. While the second layer is transmitting the video signal, the first layer has refreshed itself and is capturing another image.

A digital camcorder works in basically the same way, except that at this last stage an analog-to-digital converter samples the analog signal and turns the information into bytes of data (1s and 0s). The camcorder records these bytes on a storage medium, which could be, among other things, a tape, a hard disk or a DVD. Most of the digital camcorders on the market today actually use tapes (because they are less expensive), so they have a VCR component much like an analog camcorder's VCR. Instead of recording analog magnetic patterns, however, the tape head records binary code. Interlaced digital camcorders record each frame as two fields, just as analog camcorders do. Progressive digital camcorders record video as an entire still frame, which they then break up into two fields when you output the video as an analog signal. (To learn more about analog-to-digital picture conversion, check out How Digital Cameras Work: Digitizing Information and How Analog and Digital Recording Works.)