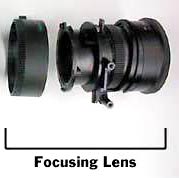 As mentioned previously, the first step in recording a video image is to focus light onto the CCD, using a lens.

To get a camera to record a clear picture of an object in front of it, you need to be able to adjust the focus of the lens -- that is, move the lens so it aims the light beams coming from that object precisely on the CCD. So, just like film cameras, camcorders let you move your lens in and out to focus light. Of course, most people need to move around with their camcorders, shooting many different things at different distances, and constantly refocusing is extremely difficult.

This is why all camcorders come with an autofocus device, usually an infrared beam that bounces off objects in the center of the frame and comes back to a sensor on the camcorder.

To find the distance to the object, the processor calculates how long it takes the beam to bounce and return, multiplies this time by the speed of light, and divides the product by two (because it traveled the distance twice -- to the object and back again). The camcorder has a small motor that moves the lens, focusing it on objects at this distance. This works pretty well most of the time, but sometimes you have to override it -- you may want to focus on something in the side of the frame, for example, but the autofocus is picking up what's right in front of the camcorder. To learn more about autofocus mechanisms, check out How Autofocus Cameras Work.

Camcorders are also equipped with a zoom lens. In any sort of camera, you can magnify a scene by increasing the focal length of the lens (the distance between the lens and the film or CCD). An optical zoom lens is a single lens unit that lets you change this focal length, so you can move from one magnification to a closer magnification. A zoom range tells you the maximum and minimum magnification. To make the zoom function easier to use, most camcorders have an attached motor that adjusts the zoom lens in response to a simple toggle control on the grip. One advantage of this is that you can operate the zoom easily, without using your free hand. The other advantage is that the motor adjusts the lens at a steady speed, making zooms more fluid. The disadvantage of using the grip control is that the motor drains battery power.

Some camcorders also have something called a digital zoom. This doesn't involve the camera's lenses at all; it simply zooms in on part of the total picture captured by the CCD, magnifying the pixels. Digital zooms stabilize magnified pictures a little better than optical zooms, but you sacrifice resolution quality because you end up using only a portion of the available photosites on the CCD. The loss of resolution makes the image fuzzy.

One of the great things about a camcorder is that it can adjust automatically for different levels of light. It's very obvious to the CCD when an image is over- or under-exposed because there isn't much variation in the charges collected on each photosite. The camcorder monitors the photosite charges and adjusts the camera's iris to let more or less light through the lenses. The camcorder computer always works to maintain a good contrast between dark and light, so that images don't appear too dark or too washed out.