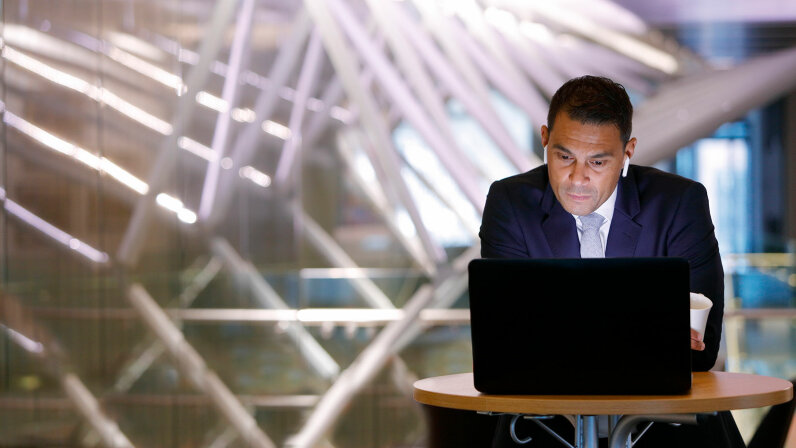 Although Bluetooth technology has become synonymous with headphones, it's used for all kinds of wireless devices. Bloom Productions/Getty Images

As our world has grown increasingly connected, we've adopted a number of technologies to help us stay in contact with our friends and family. Although many have come and gone, Bluetooth, a wireless connectivity standard using radio signals, has become one of the most commonly used protocols. The wireless technology connects mice and keyboards to our computers. Bluetooth also connects our phones to our cars to catch up on the latest podcasts during our morning commutes.

When any two devices need to communicate with each other, they have to agree on a number of points before the conversation can begin. The first point of agreement is physical: Will they talk over wires, or wireless signals? If they use wires, how many are required — one, two, eight or 25? Once the physical attributes are decided, several more questions arise:

Bluetooth offers a solution to these questions. You'll learn more about Bluetooth in the rest of this article. First, we'll explore how Bluetooth makes a wireless connection.

How Bluetooth Creates a Connection

Blueooth takes small-area networking to the next level by removing the need for user intervention and keeping transmission power extremely low to save battery power. Bluetooth is essentially a networking standard that works at two levels:

The big draws of Bluetooth are that it is wireless, inexpensive and automatic. There are other ways to get around using wires, including infrared communication. Infrared (IR) refers to light waves of a lower frequency than human eyes can receive and interpret. Infrared is used in most television remote control systems. Infrared communications are fairly reliable and don't cost very much to build into a device, but there are a couple of drawbacks. First, infrared is a "line of sight" technology. For example, you have to point the remote control at the television or DVD player to make things happen. The second drawback is that infrared is almost always a "one to one" technology. You can send data between your desktop computer and your laptop computer, but not your laptop computer and your PDA at the same time.

These two qualities of infrared are actually advantageous in some regards. Because infrared transmitters and receivers have to be lined up with each other, interference between devices is uncommon. The one-to-one nature of infrared communications is useful in that you can make sure a message goes only to the intended recipient, even in a room full of infrared receivers.

Bluetooth can do more than infrared systems. It can connect with multiple devices and doesn't require line of sight to work. Let's find out how Bluetooth networking works.

Why Is It Called Bluetooth?

Harald Bluetooth was king of Denmark in the late 900s. He managed to unite Denmark and part of Norway into a single kingdom then introduced Christianity into Denmark. He left a large monument, the Jelling rune stone, in memory of his parents. He was killed in 986 during a battle with his son, Svend Forkbeard. Choosing this name for the standard indicates how important companies from the Nordic region (nations including Denmark, Sweden, Norway and Finland) are to the communications industry, even if it says little about the way the technology works.

Bluetooth networking transmits data via low-power radio waves. It communicates on a frequency of 2.45 gigahertz (actually between 2.400 GHz and 2.483.5 GHz, to be exact) [source: Bluetooth SIG]. This frequency band is one of a handful of frequencies that has been set aside by international agreement for the use of industrial, scientific and medical devices (ISM).

A number of devices that you may already use take advantage of this same radio-frequency band. Baby monitors, garage-door openers and the newest generation of cordless phones all make use of frequencies in the ISM band. Making sure that Bluetooth and these other devices don't interfere with one another has been a crucial part of the design process.

Although the Bluetooth Special Interest Group says the technology can be used at a range of more than 3,281 feet (1 kilometer), one of the ways Bluetooth devices avoid interfering with other systems is by sending out very weak signals of about 100 milliwatts [source: PCMag Encyclopedia]. Using low power limits the range of a Bluetooth device to about 656.2 feet (200 meters), cutting the chances of interference between your computer system and your portable telephone or television [source: PCMag Encyclopedia]. Even with the low power, Bluetooth doesn't require line of sight between communicating devices. The walls in your house won't stop a Bluetooth signal, making the standard useful for controlling several devices in different rooms.

Bluetooth can handle many devices simultaneously. With all those devices in the same 32-foot (10-meter) radius, you might think they'd interfere with one another, but it's unlikely. Bluetooth uses a technique called spread-spectrum frequency hopping that makes it rare for more than one device to be transmitting on the same frequency at the same time. In this technique, a device will use 79 individual, randomly chosen frequencies within a designated range, changing from one to another on a regular basis [source: PC Mag Encyclopedia].

In the case of Bluetooth, the transmitters change frequencies 1,600 times every second, meaning that more devices can make full use of a limited slice of the radio spectrum. Since every Bluetooth transmitter uses spread-spectrum transmitting automatically, it's unlikely that two transmitters will be on the same frequency at the same time. This same technique minimizes the risk that portable phones or baby monitors will disrupt Bluetooth devices, since any interference on a particular frequency will last only a tiny fraction of a second.

Bluetooth systems create a personal-area network (PAN), or piconet, that may fill a room or may encompass a distance no more than that between a cell phone on a belt-clip and the headset on your head. Once a piconet is established, the members randomly hop frequencies in unison so they stay in touch with one another and avoid other piconets that may be operating in the same room. Let's check out an example of a Bluetooth-connected system. 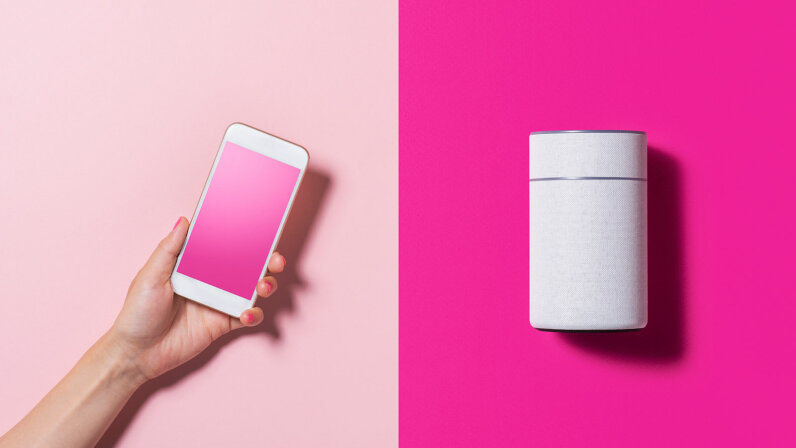 Imagine a typical modern living room with typical modern stuff inside. There's an entertainment system, a DVD player, television, perhaps a smart speaker; there may be also a smartphone, cordless phone and a laptop computer. Each of these systems uses Bluetooth, and each forms its own piconet to talk between the main unit and peripheral.

The cordless telephone has one Bluetooth transmitter in the base and another in the handset. The manufacturer has programmed each unit with an address that falls into a range of addresses it has established for a particular type of device. When the base is first turned on, it sends radio signals asking for a response from any units with an address in a particular range. Since the handset has an address in the range, it responds, creating a tiny network. Now, even if one of these devices should receive a signal from another system, it will ignore it because it's not from within the network.

The computer and entertainment system go through similar routines, establishing networks among addresses in ranges established by manufacturers. Once the networks are established, the systems begin talking among themselves. Each piconet hops randomly through the available frequencies, so all of the piconets are completely separated from one another.

Now the living room has three separate networks established, each one made up of devices that know the address of transmitters it should listen to and the address of receivers it should talk to. Since each network is changing the frequency of its operation thousands of times a second, it's unlikely that any two networks will be on the same frequency at the same time. If it turns out that they are, then the resulting confusion will only cover a tiny fraction of a second, and software designed to correct for such errors weeds out the confusing information and gets on with the network's business.

In any wireless networking setup, security is a concern. Devices can easily grab radio waves out of the air, so people who send sensitive information over a wireless connection need to take precautions to make sure those signals aren't intercepted.

Bluetooth technology is no different — it's wireless and therefore susceptible to spying and remote access, just like WiFi is susceptible if the network isn't secure. With Bluetooth, though, the automatic nature of the connection, which is a huge benefit in terms of time and effort, can also be a benefit to people looking to send you data without your permission.

Bluetooth offers several security modes, and device manufacturers determine which mode to include in a Bluetooth-enabled gadget. In almost all cases, Bluetooth users can establish "trusted devices" that can exchange data without asking permission. When any other device tries to establish a connection to the user's gadget, the user has to decide whether or not to allow it. Service-level security and device-level security work together to protect Bluetooth devices from unauthorized data transmission.

Security methods include authorization and identification procedures that limit the use of Bluetooth services to the registered user and require that users make a conscious decision to open a file or accept a data transfer. As long as these measures are enabled on the user's phone or other device, unauthorized access is unlikely. A user can also simply switch his Bluetooth mode to "non-discoverable" and avoid connecting with other Bluetooth devices entirely. If a user makes use of the Bluetooth network primarily for syncing devices at home, this might be a good way to avoid any chance of a security breach while in public.

Still, early cell-phone virus writers took advantage of Bluetooth's automated connection process to send out infected files. However, since most phones use a secure Bluetooth connection that requires authorization and authentication before accepting data from an unknown device, the infected file typically doesn't get very far. When the virus arrives in the user's cell phone or smartphone, the user has to agree to open it and then agree to install it. This has, so far, stopped most cell-phone viruses from doing much damage.

Other problems like "bluejacking," "bluebugging" and "car whisperer" have turned up as Bluetooth-specific security issues. Bluejacking involves Bluetooth users sending messages to other Bluetooth users within range. Although sensitive information may not be revealed, unwanted messages may show up on your device. Bluesnarfing is similar to bluejacking, but the messages sent out include code that force the receiving phone to reply, sending back contact information [source: Mobile Resource Group].

Bluebugging allows hackers to remotely access a user's phone and use its features, including placing calls and sending text messages, and the user doesn't realize it's happening. Blueborne requires convincing a device's owner to wake up the device, after which the hacker can control its screen and apps.

Car whisperer takes advantage of car owners' failure to change the manufacturer's PIN on their car's Bluetooth-enabled entertainment system. This allows hackers to send audio to and receive audio from the device. Like a computer security hole, these vulnerabilities are an inevitable result of technological innovation, and device manufacturers are releasing firmware upgrades that address new problems as they arise. Users can also help by changing default device PINs or passwords, and keeping their Bluetooth set to undiscoverable as a default.

For more information on Bluetooth and related topics, including full Bluetooth specifications, check out the links below.

4 Reasons Your Phone Keeps Dropping Calls
How to Import Pictures from a Cell Phone to a Laptop
Are there risks to using a service like Mbuzzy?