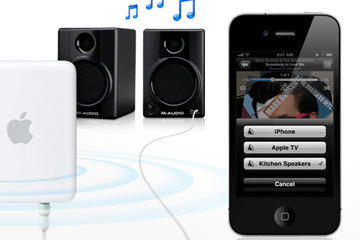 Apple AirPlay lets you stream music or movies from iTunes or your mobile Apple device to any AirPlay-enabled device on the same network.
Apple.com screen capture by HowStuffWorks staff

AirPlay is a service that Apple devices can use to stream audio and video between electronic devices. This is similar to the way you might connect to a streaming radio or video Web site, like Pandora or YouTube, except that everything is located on your network rather than out on the Internet. Using AirPlay, you can play media from a single AirPlay-compatible source, like an iPad or iPhone, and stream it to multiple AirPlay-compatible devices on the same network, including TVs and stereo systems.

AirPlay is a leap beyond just connecting stereo speakers to your iPad or iPhone. AirPlay has two active components: a source and a receiver. The source is a device running AirPlay-enabled software, meaning that it can stream media (audio or video) using AirPlay. The receiver is an AirPlay-compatible device that can play that streaming media as well as display track information, such as the song title and artist name. A single source can send its stream to multiple receivers.

As of this writing, the list of devices that could be AirPlay sources includes the iPad, second generation or later iPod Touch, iPhone 3G and 4, and the second generation Apple TV. These devices must be running Apple iOS 4.2 or later, and any application you want to stream from must have the option to enable AirPlay streaming for that app. You can also enable AirPlay from your computer by running iTunes 10.2 or later.

Also as of this writing, devices that can be AirPlay receivers are, primarily, the Apple AirPort (a proprietary wireless hub for Apple products) and Apple TV. Some devices that could be sources also have the ability to be receivers. Apple TV is the only receiver that can stream HD video and photos from your device in addition to audio. Later, we'll look at some third-party manufacturers that have partnered with Apple to produce stereo equipment with AirPlay compatibility.

As a basic example of how you might use AirPlay, suppose you have an iPhone and you launch iTunes on it to listen to your favorite tracks. Since you'll be walking around the house a lot during the day, you decide to turn on an AirPlay-enabled stereo in your bedroom and your WiFi-connected Apple TV in your living room. To make sure there's no break in the music as you move from room to room, you go back to your iPhone and select the stereo and Apple TV as recipients of your iPhone's music stream. Since they're all accessible by network connections, and they can all use AirPlay, all you have to do is turn on the receivers, click to start streaming from the source and enjoy your music.

In this article, we focus on how Apple AirPlay streams music and whether its limitations and competition could potentially outweigh its advantages. First, let's zoom in on how you can enable and use AirPlay. 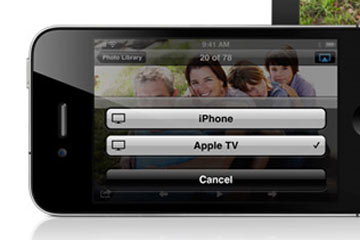 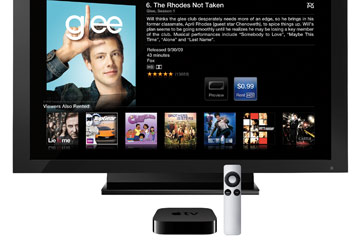 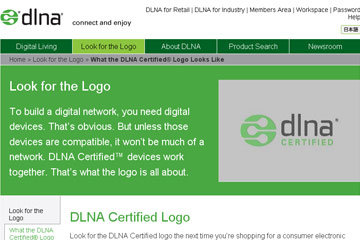 How to Look and Sound Good on Your Videoconference Call
How DVR Works
What is a speaker tweeter?