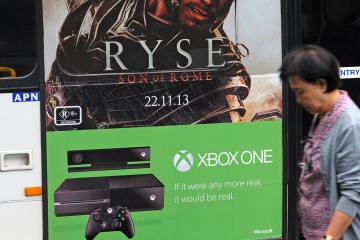 Tie-in advertising for the Xbox One and "Ryse: Sone of Rome," a game developed by Microsoft as an exclusive release title for the new console.
©GREG WOOD/AFP/Getty Images

The development of Xbox One has seen its fair share of controversy. Microsoft initially announced that users would not be able to freely buy or sell used games. They also stated that the device would have to be connected to the Internet at least once every 24 hours in order for you to play its games, even if you weren't playing online. Public outcry led to a reversal of both policies, and as it stands now, you'll be able to play most games from disc, whether online or not. Internet connection will only be required for initial setup of the device and for downloading game and system updates, including a mandatory day-one update.

Of course, a lot of features require the Internet. But at least gameplay won't be impossible if your Internet connection or Xbox's servers go down, and you won't have to repurpose any games you dislike or no longer want to play as coasters. Still, the inevitable shift from disc to digital downloads that's occurring might eventually do away with used games. You'll be able to buy any games that launch for Xbox One in digital rather than physical form if you prefer, and some games are download-only.

The facial and skeletal recognition capabilities of the Kinect have raised some privacy related fears. Fortunately, if you want to use Kinect, but are worried about potential abuse, you can turn off auto-logon as well as voice or gesture commands. You can also require a password on top of the recognition function before login is completed. And your biometric data is supposed to only be stored on your local machine, not to the cloud. As stated earlier, you're not required to use the Kinect at all. It can be unplugged and you can stick to physical controllers.

At least in reports leading up to the launch date, when you snap an app to your screen and have two sound-generating apps going at once, you will hear the audio from both at the same time. There is currently no way to choose one over the other for audio, unless one or both of the apps give you the ability to mute. This may be fixed with future updates, but as of November 2013, it remains uncertain.

Removal of the per-game Gamerscore cap of 1000 points has some consumers worried that there won't be a reasonable way to reach 100 percent of game achievements. Xbox has said that despite the lack of a cap, there will be policies the developers have to follow and they'll monitor for abuse.

And in retail whoops-a-daisy news, a few of the systems leaked out early when Target mistakenly shipped them nearly two weeks before the official launch date. Microsoft banned those systems from connecting to Xbox Live, a ban the company said it would lift closer to the release date.