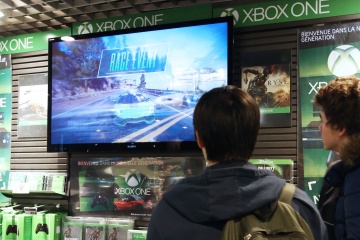 Gamers in Paris check out the Xbox One on release day, Nov. 22, 2013.
© Marion Ruszniewski/AFP/Getty Images

As with any console launch, there will be exclusive games for Xbox One, as well as exclusive content from some cross-platform games. Ancient Roman adventure "Ryse: Son of Rome," zombie game "Dead Rising 3," racing game "Forza Motorsport 5," sim game "Zoo Tycoon," fitness game "Zumba World Party" and a free trial version of "Kinect Sports: Rivals" will all launch exclusively on the release date of the Xbox One.

Several titles will be available as digital downloads via Xbox Live, including "Crimson Dragon," "LocoCycle," "Powerstar Golf" and the fighting game "Killer Instinct."

Still more exclusives are expected sometime during the launch window that ends in March 2014, such as "Peggle 2," "Minecraft: Xbox One Edition," "Project Spark" and "Titanfall." "Titanfall" will be available on both PC and Xbox, but no other consoles.

There will also be some major games released on both Xbox One and its rival, the new Sony PlayStation 4 (PS4), including "Battlefield 4," "Call of Duty: Ghosts," "Assassin's Creed IV: Black Flag," and "Lego Marvel Super Heroes."