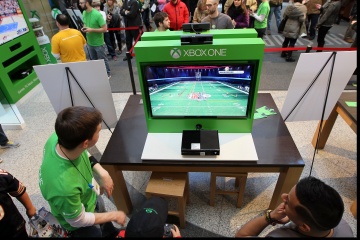 The day after the console’s release, the Microsoft Store at The Shops at North Bridge in Chicago, Ill. held a tournament event hosted by famed Chicago Bulls player Scottie Pippen.
© Tasos Katopodis/Getty Images for Microsoft

Xbox One has a lot of good news for gamers. The new system has a faster processor, more memory and better graphics. You can reportedly start playing games before they even finish installing. Multiplayer start times are faster, and, as previously mentioned, you can leave a game and come back without losing your spot. Your Xbox Live Gold membership will work on both Xbox One and Xbox 360, so there will be no need for two accounts or for ditching your old system before you're ready. And your Gamertag and Gamerscore (a score based on in-game achievements) will follow you from the Xbox 360. In bad news, Xbox One won't have backwards compatibility with older games. The older controllers will not be compatible with the new machine, either, so you'll have to start your controller collection anew.

Regarding Gamerscore, Microsoft has removed the 1000-point-per-game limit and now allows developers to add achievements on a weekly, monthly or quarterly basis, giving opportunities for achievements without the need to download new game add-on code. The data will instead be stored in the cloud. There will also be timed challenges that can be completed for specific titles or sets of titles that can earn you in-game rewards, but not Gamerscore points. Some of them will actually be community rather than solitary activities. Xbox has even created a media achievement system separate from Gamerscore for non-game apps to gamify things like your video watching habits.

There have also been artificial intelligence improvements. The SmartMatch feature uses advanced algorithms to pair you with players similar to yourself. The system will also learn from your gameplay to match you with better computer-generated opponents. The reputation system has apparently been overhauled and will do things like isolate problem players (for instance, those who are constantly blocked or are the subject of enforcement actions) into groups, matching them up with each other for multiplayer gaming rather than with the non-problem-causing players. A player's negative reputation could earn him or her a red mark as a warning to others, and the reputation of a group will be determined by the player with the lowest score. There are apparently safeguards to keep people from being able to gang up and reduce your reputation fraudulently.

A new Game DVR feature lets you record up to five minutes of your gameplay at a time at 720p and 30 frames per second to keep or share. Just say, "Xbox, record that," while gaming. The console is, in fact, constantly keeping five minutes of your game recorded, just in case something unexpected happens that you might want to keep. You can use the Upload Studio app to edit, record a voice-over or otherwise customize your clips before you share them. You'll be able to upload via Xbox Live at first, and Facebook and YouTube sharing should be enabled sometime in 2014. You can also set the Game DVR to automatically record special moments, like when you unlock achievements.

There are some notable game-related apps. Twitch, which lets you live broadcast your gameplay and chat with other gamers, will be integrated into Xbox One for easy sharing and socializing. Machinima will also launch a new, more highly integrated version of its app at Xbox One launchtime, which will let users pull up walkthroughs, help videos, reviews and other helpful information.