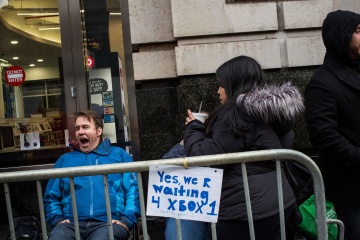 New Yorkers wait in line outside a Best Buy for the midnight release of the XBox One in November 2013.
©Andrew Burton/Getty Images

It's been more than a decade since software giant Microsoft fought its way into the gaming console market with the original Xbox in 2001. That device was a powerful console built for the future of gaming with an internal hard drive and built-in broadband connectivity -- unheard of in other consoles of the day, especially since not that many people had broadband Internet at the time. It also had other media capabilities, such as the ability to play CDs and DVDs, but it was mainly a very cool, albeit unprofitable, gaming system.

The company then revolutionized online multiplayer gaming with the launch of Xbox Live in 2002, which allowed players to connect with each other worldwide. The ability of developers to provide downloadable content also let games continue to grow and change after release.

The Xbox 360, released in 2005, was an even more advanced gaming powerhouse, but as media streaming apps became available, it also became an entertainment hub in a lot of homes. Still, it only allowed you to do one thing at a time, and its non-gaming, non-streaming features, such as Internet browsing via a game controller, could be unwieldy. Voice and motion control became possible with the introduction of the Kinect external device in 2010.

Xbox One, the latest member of the Xbox family, incorporates many new entertainment, social and computing features, as well as a leap forward in voice and motion control through the new generation of the Kinect. It's now beginning to resemble an all-in-one (or most-in-one) central home media system. And Microsoft is hoping that it will come to dominate your living room. Plus, it improves on its predecessor with a faster processor, more memory, better graphics, very quick switching between applications and a newfound ability to multitask.

Read on to get the scoop on this not-just-a-gaming system from Microsoft.