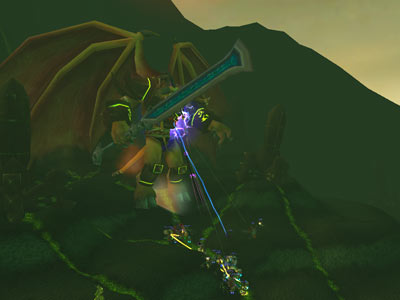 All the maps and scenery in "World of Warcraft" live on your computer, but information about what's going on in the world has to come from a server. Based on the information it gets from your game client, the server performs a lot of calculations about the world, including:

The server also collects information from other players clients' -- whether you're in a group with them or not -- and relays it to your computer. This allows you to see other characters, their gear and their actions in the game. It also lets you receive chat messages, guild invitations and group invitations. This information doesn't travel directly from another user's computer to yours -- it travels to you via the server.

The efficiency of all of these interactions is dependent upon the amount of time it takes a message to travel from a client to a server and back. Players who experience high latency -- or a long travel time -- can see significant delays between when they perform an action and when they see it happen on the screen.

A battle against a mob is an ongoing exchange of information between your computer, the computers of the people in your group and the server. For example, say you and some friends plan to Doom Lord Kazzak, a raid boss in Outland. Here's what happens:

PvP combat is a little different -- the server still makes calculations, but other players, rather than artificial intelligence, control the other combatants. But regardless of whether an AI script or a human brain is in charge, the battle itself can often be challenging.

Keeping "World of Warcraft" running is a 24-hour-a-day process. Although technical support hotlines aren't always open, there are game masters working within the game world around the clock. As of 2006, Blizzard employed 1,300 game masters [source: Vivendi].