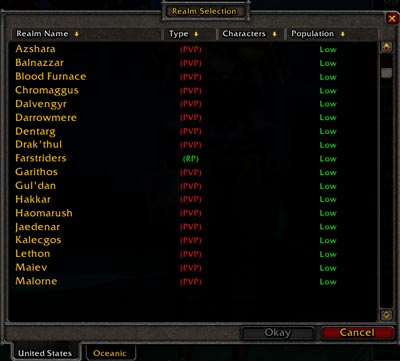 Many players think of "World of Warcraft" servers in terms of world servers, or realms. These are essentially complete, self-contained copies of the game world named after people and places in Warcraft lore. There are about 200 realms in North America and other realms in different parts of the world. Playing the game on servers not owned by Blizzard or one of the companies that hosts official servers in Asia is a violation of the terms of use.

You can make characters on lots of different servers, but characters can't communicate across servers unless they're in the same player versus player (PvP) battleground.

A world server isn't a single server, though -- it's a collection of servers. As of 2006, Blizzard had about 9,000 servers around the world [source: Vivendi].

When you log on to your "World of Warcraft" account, you do so using an authentication server. This server verifies your name and password before transferring you to the realm on which you last played. Exactly which portion of the server you access depends on where you logged out of the game. Blizzard hasn't disclosed the exact architecture of its world servers, but based on the game's behavior, several server divisions are clear.

Each of the world's three continents -- Kalimdor, the Eastern Kingdoms and Outland -- has its own servers. There's also a separate server for instances, or the game's dungeons. When a group enters an instance, the game spawns a copy of that dungeon for the group. Other groups and players can't enter it. A database server, or a database function running within the servers, provides information on the locations and respawn time all of the items players can loot (pick up) or otherwise interact with in the game world, including:

These items persist across all the servers that make up the realm. Some chat channels, like group and guild chat, are also accessible no matter where you are in the game world. Others, like general cannels for specific regions within the game, are accessible only when you're in that particular zone.

Everything about your particular character, including the quests you've completed, your level and all your gear, is stored in a database that's tied to your "World of Warcraft" account. You can log in from any computer that is running the game and find your character exactly the way you left it. This database can also interface with a Web server, allowing you to do things like look at other players' gear and your own at the "World of Warcraft" armory. You can also pay a small fee and have your character moved from one server to another -- Blizzard adjusts its database accordingly.

To play the game, your computer has to communicate with one of these sets of servers. We'll take a look at what happens on the next page.

Until August of 2006, each "World of Warcraft" realm had its own PvP battlegrounds. Then, Blizzard released a patch that created cross-realm battlegrounds -- each battleground could host players from multiple realms. For this purpose, realms are now organized into battlegroups that share a common set of battlegrounds.