The Game Client: A Play-by-play 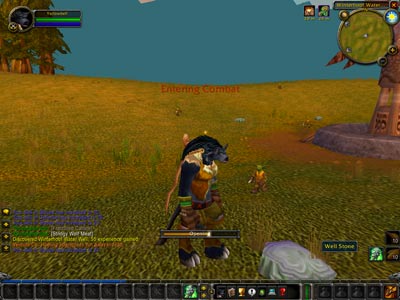 Let's examine the image below as an example of how the "World of Warcraft" game client works. In it, a shaman named Yellowbell is collecting a stone for a quest, but she's caught the attention of a goblin, which is on his way to attack her. Here's what's happening from a client perspective:

These are just the highlights. The client constantly accesses or receives information about the game world and the characters in it. The more other characters there are nearby, the more work the server has to do. This is why some players' games can slow to a crawl in highly populated areas -- the computer's CPU and video processor can't keep up with all the information they need to display. In some cases, the frame rate, measured in frames per second (FPS), can drop dramatically, causing players to see the world as a series of still pictures rather than a moving scene.

The client also stores information about your character and your in-game options in the WTF folder on your hard drive. Files in this folder are usually in one of three formats:

We'll look at Lua -- the language used to create "World of Warcraft" addons -- on the next page.

The world you see when you play World of Warcraft starts with a wire frame or mesh -- a set of polygons that gives the landscape its dimensions. On top of that are textures that add all the colors and artwork to the surface underneath. Imagine stretching a colorful parachute over a jungle gym and you've got a pretty good idea of how this works. The world is also full of doodads, or decorative objects. Players can interact with some doodads, such as chairs, cooking fires or portcullises.