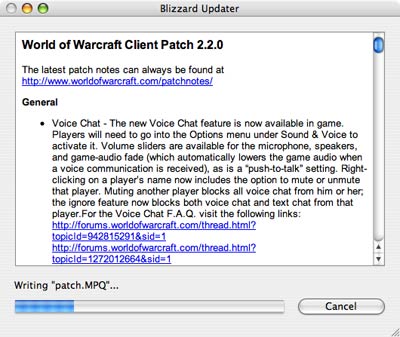 The "World of Warcraft" program you install on your computer is the client, which has four primary duties. The client:

The client gets a large portion of its data from archives stored on the computer's hard drive. Much of the visual information is stored in MPQ format, an archive format proprietary to Blizzard. Sounds are generally stored as WAV or MP3 files. As players move through the world, the client caches some of this information in a folder for faster access.

The client isn't static -- it changes as the game develops. Blizzard releases patches to "World of Warcraft" to fix bugs, adjust game play issues and add new content, like quests and dungeons. Lots of players access the game world simultaneously, and each one has to be able to see the same features and operate under the same rules. For this reason, Blizzard pushes new patches to each player's computer. When you open your game after a new patch has been released, your client will automatically download and install the patch. Blizzard's background downloader can also download pieces of the patch that are ready for release ahead of time to cut down on the amount of time it takes to get a patch.

Separate from the client, but related to it, is the game launcher. The launcher is a small program that provides hyperlinks to new information at the Blizzard Web site. It also lets you know when new patch information is ready to download and opens your game itself. The launcher can also check your computer for viruses, hacks and cheating software and warn you if it finds them.

Once you launch the program and log in, the client begins to recreate the game world. We'll look at what happens on the next page.

Viruses are malicious programs that could damage your computer. In the case of "World of Warcraft," they could steal your login information, allowing someone else to access your account. The culprit could sell your character to another player or sell all of your possessions and steal the profits.

Hacks and cheats can do anything from playing the game for you to tricking the game server into thinking you're moving faster than you are. Either way, programs like these are against Blizzard's Terms of Use for "World of Warcraft." If you use programs like these while playing "World of Warcraft," Blizzard's cheat-detection program, known as "Warden," may detect your activities, causing Blizzard to close your account. Some players consider "Warden" to be an invasion of privacy, while others feel it helps keep the in-game playing field level.