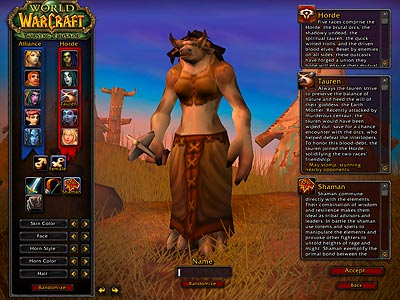 As of July 2007, "World of Warcraft" had more than 9 million active subscribers worldwide [source: Blizzard, press release]. While there's no publicly-available, comprehensive census of exactly who plays the game, there are several researchers who have studied WoW players extensively.

Researcher Nick Yee has used online surveys to poll "World of Warcraft" players about themselves and their characters. These responses come from a self-selected group, or people who have decided for themselves to visit Yee's Web site and fill out the survey. This means that the results may not represent the world's demographics as accurately as a random sample would. Instead, it may reflect a particular subset of players -- those who are serious enough about the game to research it online and to feel motivated to spend time answering questions about it.

According to one of Yee's 2005 studies, 84 percent of "World of Warcraft" players are male, and 16 percent are female. The average player's age is 28, and female players tend to be a few years older than male players. Regardless of their gender, players spend an average of 21 to 22 hours a week playing the game [source: Yee, WoW Demographics]. Of course, these statistics may have shifted since Yee collected his data. You can learn more about Yee's research at The Daedalus Project.

The amount of time people spend in the game world depends in part on their characters' levels. According to research conducted at the Palo Alto Research Center in 2005, players tend to put in an extra burst of playing time when a character is about to reach a milestone level. At the time of the study, players gained access to a mount, such as a horse, tiger or kodo, at level 40. The study showed a spike in play time leading up to level 40 that was even greater than the spike leading to level 60, which was the highest possible level when the study was conducted. However, once people reach the highest levels, they generally spend more time playing than they did at lower levels [source: PARC, Playing Time]. Now, players gain mounts at level 30 and top out at level 80 with "Wrath of the Lich King" installed.

These numbers relate to one of the reasons people play "World of Warcraft" and similar games -- for the feeling of accomplishment that comes from in-game achievement. But there are also other reasons for participation in the online world, including:

Researcher Richard Bartle placed these four types into four categories, described as achievers, socializers, explorers and killers. This has become a commonly-used model for describing how and why people participate in role-playing games.

You can also describe "World of Warcraft" players in terms of which activities they participate in while playing. Hardcore raiders spend most of their time in high-level dungeons. Other players spend most of their time in player-versus-player (PvP) environments. Some PvP enthusiasts are twinks, or players who advance to a particular level and then acquire lots of gear that will make them more powerful than other players of the same level. Then, there are the casual players, who may enter raid dungeons and PvP battlegrounds but who don't spend their game time focusing on them exclusively.

Regardless of exactly what people are doing in the game, they're using the same basic tool to access the world -- a computer. Next, we'll look at the "World of Warcraft" client and how it runs.

There are lots of theories about why people play MMORPGs and why players spend so much time in virtual worlds. According to another of Yee's research projects, MMORPGs essentially replace players' TV-watching time. On average, Americans spend about 28 hours a week watching TV. MMORPG players spend only about 7.7 hours watching television and a little more than 20 hours in the game world [source: Yee, TV].