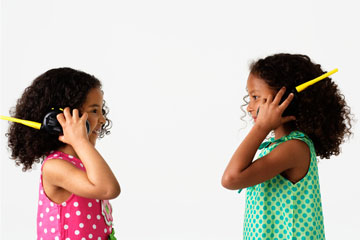 The basic components in kids’ walkie-talkies are the same as the ones grown-ups use.
© Sean Justice/Corbis

With all this talk about frequencies and wattage, you might be wondering about the real-world range of walkie-talkies. Commercial-grade walkie-talkies have enough oomph to give them a range of several miles in ideal conditions. But as with so many product specifications, manufacturers often wildly exaggerate the range of their walkie-talkies, sometimes claiming that they'll work at more than 20 miles (32 kilometers).

But in areas where there are buildings, hills, trees or any sort of obstructions at all, expect the working range to drop in a hurry. In very congested areas, even good-quality radios may max out their range in several hundred feet.

Once you're within range of another handset, there's still the matter of conducting a proper walkie-talkie conversation. Because only one person can speak at a time, each walkie-talkie operator needs to know the rules. For example, saying "over" indicates that you are done speaking and that you're awaiting a reply. Alternately, by saying "over and out," you're telling listeners that you're done with your transmission and that the conversation is over. These so-called voice procedures are necessary to prevent people from talking over each other during transmission.

As walkie-talkie features become more advanced, some of these linguistic acrobatics are becoming less necessary. For instance, some radios send a beep tone when you release the PTT button, in effect replacing "over" with an automatic tone.

Radio lexicon can be a strange language for radio novices. But what's even weirder? The sound of a stranger's voice on your handset.

If another person's radio is within range of yours and it happens to be set to the same channel, there's a chance that you'll hear what he or she is saying, and vice versa. To prevent this, your group can select a different channel, or you can invest in walkie-talkies with CTCSS (continuous tone-coded squelch system) or DCS (digital-coded squelch) encoding.

This encoding isn't encryption at all -- that kind of functionality is found only in military-grade radios. Instead, the encoding is just a type of filtering. In other words, your radio's speaker will only activate when it receives a transmission from another radio that precedes its message with a specific tone combination. Your group's radios, of course, must all be using the same privacy code in order to work with each other.

Even with privacy codes in place, walkie-talkie conversations are anything but secure. Think of these transmissions as publicly-accessible phone calls. Spewing weird rants or private details over the air violates basic radio etiquette and might garner some really unwanted attention from aggravated users. 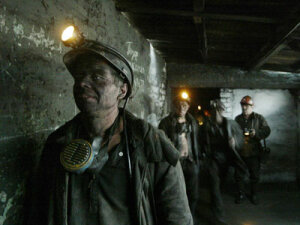