TV Motion and Your Brain 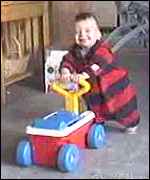 The human brain's second amazing feature relating to television is this: If you divide a moving scene into a sequence of still pictures and show the still images in rapid succession, the brain will reassemble the still images into a single, moving scene. Take, for example, these four frames from the example video:

Each one of these images is slightly different from the next. If you look carefully at the baby's left foot (the foot that is visible), you will see that it is rising in these four frames. The toy also moves forward very slightly. By putting together 15 or more subtly different frames per second, the brain integrates them into a moving scene. Fifteen per second is about the minimum possible -- any fewer than that and it looks jerky.

When you download and watch the MPEG file offered at the beginning of this section, you see both of these processes at work simultaneously. Your brain is fusing the dots of each image together to form still images and then fusing the separate still images together into a moving scene. Without these two capabilities, TV as we know it would not be possible.