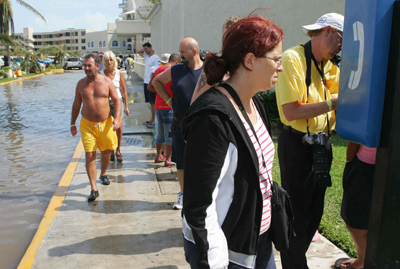 An international E.164 number is designed to include all of the necessary information to successfully route a call to an individual subscriber on a nation's public telephone network. Here's how the E.164 numbering plan works:

The combined length of the national (significant) number can't exceed (15-n), where n is the amount of digits in the country code. This allows each country to decide how many digits should be in the national destination code and the subscriber number. A country with a relatively small population and few major cities, for example, might choose to have fewer digits in their phone numbers. And for larger countries, the possibilities are nearly endless. A 15-digit number allows for 100 trillion different permutations, enough for each person on earth to have 10,000 phone numbers [source: SearchNetworking].

Not all nations have a standard amount of digits for every location in the country. In Mexico, for example, the three largest cities -- Mexico City, Guadalajara and Monterrey -- have eight-digit subscriber numbers while all other locations have seven-digit numbers. The important thing is that all Mexican phone numbers adhere to the standards set forth by the E.164 recommendation.

The E.164 recommendation is currently being expanded into a much broader protocol called ENUM, short for TElephone NUmber Mapping. Using the international E.164 number as a model, ENUM will assign a specific Uniform Resource Identifier (URI) to each and every networked device, including analog telephones and fax machines, mobile phones, computers and PDAs. With this new URI, all these devices will be able to contact each other directly using a single network address/phone number. As of this writing, a final ENUM recommendation hasn't been published.

For lots more information about telephone country codes and related topics, check out the links below.