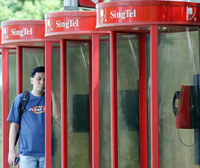 More and more foreign citizens are coming to the United States for improved education and job opportunities. Currently, the United States has an annual net immigration of 1.25 million people per year [source: Center for Immigration Studies]. In addition, the increasing globalization of business has led corporations to set up offices ranging from Indiana to India.

International travel is also a huge industry, with overseas citizens making over 185 million visits to the United States in 2004 alone [source: Bureau of Transportation Statistics].

All these factors have led to the rise in international calls. However, if you don't know the right way to make an international call, they can become extremely expensive. Many more international calling options exist today than there did even a few years ago. Several of these new methods rely on revolutionary new technologies like VoIP (Voice over Internet Protocol), which makes phone calls over the Internet rather than traditional phone lines.

In this HowStuffWorks article, we'll explain how to make international calls easily and (in some cases) cheaply from landlines, VoIP phones, cell phones and within conference calls.

Let's start with the basics: making international calls from a landline.