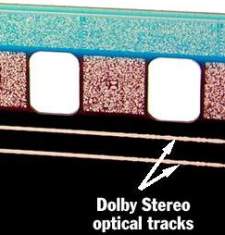 Like stereophonic sound, the original Dolby Stereo® had three front channels and a surround-sound channel. But instead of using magnetic tracks, it reverted back to the superior optical track technology to allow for clearer sound playback. Dolby stereo also used an advanced noise-reduction process, which improved sound quality further. (See How Movie Sound Works for details.) Today, Dolby Stereo is the analog sound standard, thanks to its superior sound quality and relatively simple installation.

The heightened sound quality of Dolby Stereo led moviemakers to make more extensive use of the surround channel. George Lucas' "Star Wars," one of the first films encoded for Dolby Stereo, used surround sound to heighten its epic space battle scenes. By gradually panning the sound of fighter ships from the front channels to the rear channel, sound engineers made it seem like the ships were flying off screen over the audience.

Later movies followed the "Star Wars" model, using the surround track to create fantastic effects, as well as fill in background noise to establish a scene's setting. In later versions of the surround-sound system, theater owners could hook up a subwoofer to handle extremely low-frequency sounds (a crossover unit can separate out these sounds from both audio tracks). Many moviemakers use the subwoofer to create a powerful rumbling in the theater, shaking the audience when there is an explosion or earthquake on-screen. The subwoofer channel in both analog and digital surround-sound systems is sometimes called the low frequency effects (LFE) channel.

In 1982, Dolby launched Dolby Surround®, a version of Dolby Stereo for home entertainment systems. Dolby Surround reproduces the effect of Dolby Stereo in the theater, but it works a little bit differently. The audio channels are encoded as magnetic tracks on video tape or broadcast as a television signal, rather than put down as optical tracks. The speakers are set up in the same basic way as in a theater, except the original home Dolby system only had three channels --- left speaker, right speaker and rear speaker. In 1987, Dolby introduced Dolby Pro Logic®, which had an additional channel for a front central speaker. (See How Home Theater Works for more information.)

The real innovation of Dolby Stereo is how so much audio information is squeezed into a small space on the film. When Dolby engineers started working on the new format, they figured out they would only be able to fit two optical tracks in the available space. In order to allow for four separate audio channels, they developed a special 4-2-4 processing system. In this system, originally used in the quadraphonic home stereo recordings of the early 1970s, four channels of audio information are encoded into two tracks. In the next section, we'll find out about the clever trick that makes this possible.