When it comes to home theater, a lot of people think big -- a big picture and lots of sound coming from a widescreen TV and an array of speakers. But the typical home-theater setup, with its surround-sound speakers and subwoofer, won't work for every home. Some people don't have enough room for all of that equipment. Others don't want their living rooms cluttered with cables, or they don't want the hassle of adjusting the placement and height of lots of speakers.

Regardless of their exact setup, these systems work on the same basic principles. They use a number of techniques to modify sound waves so that they seem to come from more speakers than are really there. These techniques came from the study of psychoacoustics, or the manner in which people perceive sound. In this article, we'll explore the traits of human hearing that allow two speakers to sound like five, as well as what to keep in mind if you shop for a virtual surround-sound system.

Virtual surround-sound systems take advantage of the basic properties of speakers, sound waves and hearing. A speaker is essentially a device that changes electrical impulses into sound. It does this using a diaphragm -- a cone that rapidly moves back and forth, pushing against and pulling away from the air next to it. When the diaphragm moves outward, it creates a compression, or area of high pressure, in the air. When it moves back, it creates a rarefaction, or area of lower pressure. You can learn more about the details in How Speakers Work.

Compressions and rarefactions are the result of the movement of air particles. When the particles push against each other, they create an area of higher pressure. These particles also press against the molecules next to them. When the particles move apart, they create an area of lower pressure while pulling away from the neighboring particles. In this manner, the compressions and rarefactions travel through the air as a longitudinal wave.

When this wave of high- and low-pressure areas reaches your ear, several things happen that allow you to perceive it as sound. The wave reflects off of the pinna, or external cone, of your ear. This part of your ear is also known as the auricle. The sound also travels into your ear canal, where it physically moves your tympanic membrane, or eardrum. This sets off a chain reaction involving many tiny structures inside your ear. Eventually, the vibrations from the wave of pressure reach your cochlear nerve, which carries them to the brain (brain.htm) as nerve impulses. Your brain interprets these impulses as sound. How Hearing Works (hearing.htm) has lots more information about your ear's internal structures and what it takes to perceive sound.

In addition to allowing you to interpret the sound, your brain also uses lots of aural cues to help you figure out where it came from. This isn't always something you think about or are even consciously aware of. But being able to locate the source of a sound is an important skill. This ability helps animals locate food, avoid predators and find others of their species. Being able to tell where a sound came from also helps you decide whether someone is following you and whether a knock outside is at your door or your neighbor's.

These cues and the physical properties of sound waves are central to virtual surround sound. We'll look at them in more detail next.

One method for creating a virtual surround-sound environment is . is a set of rules and algorithms that re-create multi-channel sound for devices that have only two ordinary speakers. It's a feature found in certain TVs, stereo systems, and computers rather than a separate, physical component of a home-theater system. A similar technology is Dolby Headphone, which uses sound-processing algorithms to let a normal set of headphones mimic a set of surround-sound speakers. You can learn more about other Dolby technologies in How Movie Sound Works.

Most people have had the experience of sitting in a very quiet room, like a classroom during a test, and having the silence broken by an unexpected noise, like change falling from someone's pocket. Usually, people immediately turn their heads toward the source of the sound. Turning toward the sound seems almost instinctive -- in an instant, your brain determines the sound's location. This is often true even if you can only hear in one ear.

Imagine that the coins in our quiet classroom example hit the floor somewhere to your right. Because the sound travels as physical waves through the air -- a process that takes time -- it reaches your right ear a fraction of a second before it reaches your left. In addition, the sound is a little quieter by the time it reached your left ear. This reduction in volume is because of the natural dissipation of the sound wave and because your head absorbs and reflects a little bit of the sound. The difference in volume between your left and right ears is the interaural level difference (ILD). The delay is the interaural time difference (ITD).

Time and level differences give your brain a clear idea of whether a sound came from your left or your right. However, these differences carry less information about whether the sound came from above you or below you. This is because changing the elevation of a sound affects the path it takes to reach your ear, but it doesn't affect the difference between what you hear in your left and right ears. In addition, it can be hard to figure out whether a sound is coming from in front of you or behind you if you're only relying on time and level differences. This is because, in some cases, these sounds can produce identical ILDs and ITDs. Even though the sounds are coming from a different location, the differences in what your ears hear are still the same. The ILDs and ITDs are identical in a cone-shaped area extending outward from your ear known as the cone of confusion.

ILDs and ITDs require people to be able to hear in both ears, but people who cannot hear in one ear can still often determine the source of sound. This is because the brain can use the sound's reflection off of the surfaces in one ear to try to localize the sound's source.

Your brain can use a sound wave's reflection off of the pinna, or auricle, of your ear to determine the sound's location.
Image courtesy National Institute on Deafness and Other Communication Disorders

When a sound wave reaches a person's body, it reflects off of the person's head and shoulders. It also reflects off of the curved surface of the person's outer ear. Each of these reflections makes subtle changes to the sound wave. The reflecting waves interfere with one another, causing parts of the wave to get bigger or smaller, changing the sound's volume or quality. These changes are known as head-related transfer functions (HRTFs). Unlike with ILDs and ITDs, the sound's elevation, or the angle at which it hits your ears from above or below, affects its reflections of the surfaces of the body. The reflections are also different depending on whether the sound comes from in front of or behind your body.

HRTFs have a subtle but complex effect on the shape of the wave. The brain interprets these differences in the wave's shape, using them to find the sound's origin. We'll look at how researchers have studied this phenomenon and used it to create virtual surround-sound systems in the next section. 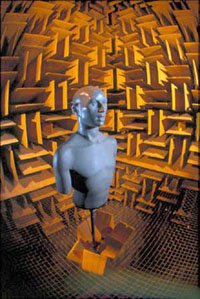 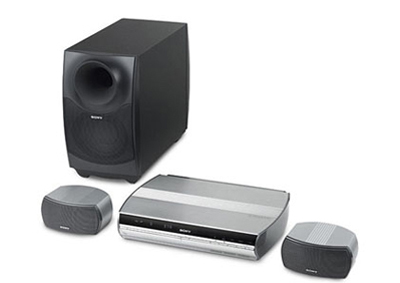 To learn more about virtual surround sound and related topics, check out the links on the next page.