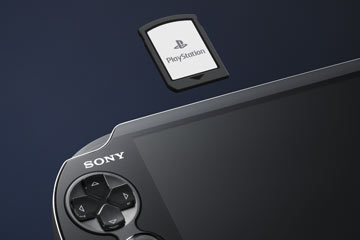 The PS Vita will no longer use the Universal Media Disc that the PSP used.
©2011 Sony Computer Entertainment Inc.

When Sony debuted the PSP back in 2004, one of its major selling points was the Universal Media Disc. Years before, when Sony launched the PlayStation, it embraced a technology that had yet to prove itself in the gaming world: the CD. While Nintendo stuck to trusty cartridges, Sony chose CDs for the PlayStation, and the gambit paid off. CDs were cheaper and easier to press, and eventually PlayStation games would span multiple discs to make room for lengthy CG videos.

With the PSP, Sony once again displayed its affinity for optical media, creating a new disc format -- the UMD -- that was stored inside a plastic shell for protection, with a small unguarded window allowing a laser to read the disc. Sony pushed the UMD as a new media platform, and early in the PSP's life movies were released on UMD. But the format never really caught on, and the UMDs presented other problems: battery usage and slow load times [source: Gamespot]. With all that background information, this next sentence should come as no surprise: Sony has done away with the UMD in the PS Vita. That means no backwards compatibility with PSP disc games, but it also means a fresh start for the PS Vita.

Back in the 90s, when Sony chose the CD for the PlayStation, discs were far cheaper and more capacious than cartridges. Since then, flash memory has made remarkable strides in affordability and storage capability. The PS Vita will use a new flash memory cartridge format, dubbed the NVG, that comes in 2GB and 4GB sizes [source: Blog NGP]. Even at 2GB, the NVG flash cards hold more than the maximum capacity of a dual-layer UMD! Best of all, flash memory offers flexibility -- Sony can (and likely will) offer larger cards for more sophisticated games as the platform grows [source: Parfitt]. The PS Vita actually houses two slots for flash media -- one for the NGV, and one for another format, likely the Memory Stick PRO Duo the PSP supports for housing downloadable games and save data [source: Blog NGP].

As with the PSP, there will be downloadable games available from the PlayStation Network that don't see a full retail release. But this time, Sony's making sure it comes at both physical and digital distribution with a solid plan, which is why every game available on store shelves will be offered as a download, too [source: Parfitt].