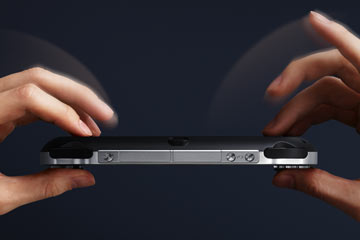 Compared to the PSP, the PS Vita is an absolutely turbo-charged piece of pocket-sized technology. Of course, with a half decade of research and development in the mobile sector between the two devices' releases, that's no surprise. The PS Vita runs on a quad-core ARM Cortex-A9 processor, with each core capable of a clock speed up to 2GHz. The Cortex-A9 chip is already on the market in several high-end mobile devices, including Apple's iPad 2 and Android smart phones that use the Nvidia Tegra 2 system-on-a-chip [source: Anandtech]. However, those devices are all using dual-core Cortex-A9 processors, so the PS Vita and its four cores is an extremely powerful mobile device. To complement the Cortex-A9, Sony has outfitted the PS Vita with the PowerVR SGX543MP4+ graphics processor, which can push 133 million polygons onto the screen every second at a clock speed of 200MHz [source: Gamespot].

Sony hasn't revealed every minute detail of the PS Vita's hardware specifications. It's still unknown exactly how fast the CPU and GPU will run -- while faster clock speeds enable better performance, they also draw more power. Additionally, the amount of RAM in the handheld is unclear. Judging by the RAM of modern smart phones, the PS Vita will likely house a minimum of 512MB of RAM.

The PS Vita actually takes after smart phones in a number of ways; take away the five-inch screen and analog sticks, and the PS Vita packs some very familiar hardware. Sony has incorporated the same six-axis motion sensing system in the PS Vita that many smartphones have: It consists of a three-axis accelerometer and a three-axis gyroscope. These devices provide motion control capabilities and allow the device to detect its roll, pitch, and yaw. Another sensor, a three-axis electronic compass, gauges the PS Vita's orientation to the ground based on the Earth's magnetic field.

In addition to basic WiFi 802.11b/g/n support, Sony incorporated 3G, Bluetooth and GPS into the PS Vita. In June 2011, Sony announced that AT&T would be the exclusive cellular carrier for the PS Vita. The announcement was met with a less than enthusiastic response from the gaming community. Sony will offer a WiFi-only version of the PS Vita for consumers who aren't interested in a 3G contract with AT&T.