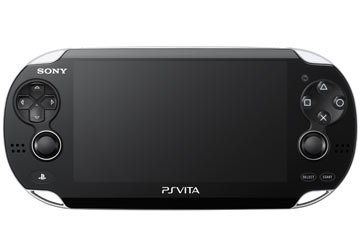 The PS Vita has a similar look to its predecessor, the PSP.
©2011 Sony Computer Entertainment Inc.

Anyone who's seen a PlayStation Portable will recognize the PS Vita as Sony's next handheld gaming system immediately. The Vita retains the PSP's horizontal "slab" design, with movement controls -- a directional pad and an analog stick -- on the left side of a 16:9 screen, and the PlayStation's classic action buttons (triangle, square, X and O) situated on the right. Though Sony could tweak the PS Vita's exact dimensions before release, as of July 2011, the portable system measures 7.2 inches by .7 inches by 3.3 inches (1.8 centimeters by 1.9 centimeters by 8.4 centimeters) [source: Tested]. Sony hasn't specified the system's exact weight, but its dimensions are only slightly larger than the PSP's.

The PS Vita increases the PSP's screen size by 0.7 inches (1.8 centimeters), from 4.3 inches (10.9 centimeters) to an even 5 inches (12.7 centimeters), while doubling its resolution from 480 by 272 pixels to 960 by 544 pixels. The PS Vita's fancy OLED screen is even touch-sensitive, like today's smart phones and tablets [source: Tested]. That's just one of the new input methods available with the PS Vita: The PlayStation Portable's single analog nub has been revamped with a new joystick design, and Sony added a second joystick to the right side of the unit in between the action buttons and the Start and Select buttons. The basic button complement is rounded out by a PlayStation button and volume controls.

The PS Vita's top corners are guarded by the familiar L and R shoulder triggers, but around the back is something brand new: a second touchpad gamers can use with the tips of their fingers when gripping the handheld. Cameras have been added to the front and rear of the device, both joysticks are clickable (giving them a secondary button action like the joysticks on the PlayStation controller) and a microphone is built right in.

To fully understand everything Sony's added to the PS Vita, though, we'll have to look past the surface and dive into the PS Vita's hardware.