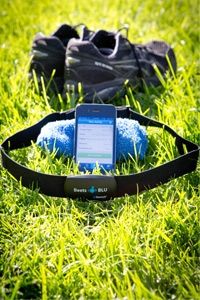 Bluetooth can link your phone to lots of different peripherals, including this Beets BLU heart rate monitor.
© Frank Duenzl/dpa/Corbis

The core services on smartphones all tie in to the idea of a multipurpose device that can effectively multitask. A user can watch a video, field a phone call, then return to the video after the call, all without closing each application. Or he or she can flip through the digital calendar and to-do list applications without interrupting the voice call. All of the data stored on the phone can be synchronized with outside applications or manipulated by third-party phone applications in numerous ways. Here are a few systems that smartphones support.

This short-range radio service allows phones to wirelessly link up with each other and with other nearby devices that support it. Examples include printers, scanners, input devices, computers and headsets.

Some varieties of Bluetooth only allow communication with one device at a time, but others allow simultaneous connection with multiple devices. To learn more, check out How Bluetooth Works.

A phone that keeps track of your personal information, like appointments, to-do lists, addresses, and phone numbers, needs to be able to communicate with all of the other devices you use to keep track of those things. There are hundreds of possible platforms and applications you might use for this in the course of a day. If you want to keep all of this data synchronized with what's on your phone, then you generally have to look for a cell phone that speaks the languages of all of the devices and applications you use. Or you can go out and buy new applications that speak the language of your cell phone.

The Open Mobile Alliance (OMA) is a collaborative organization with the following mission:

Be the center of mobile service enabler specification work, helping the creation of interoperable services across countries, operators and mobile terminals that will meet the needs of the user.

The OMA formed a Data Synchronization Working Group, which continued the work begun by the SyncML Initiative. SyncML was an open-standards project designed to eliminate the trouble of worrying about whether your personal information manager tools sync up with your phone and vice versa. The project is designed so that any kind of data can be synchronized with any application on any piece of hardware, through any network, provided that they are all programmed to OMA standards. This includes synchronization over the Web, Bluetooth, mail protocols and TCP/IP networks.

SyncML allows data to be synchronized from a phone to Windows, Mac and Linux applications using Bluetooth, infrared, HTTP or a USB cable. Visit the OMA Web site for more information.

A smartphone that's compatible with the Java programming language allows the user to load and run Java applications and MIDlets. MIDlets are applications that use a subset of Java and are specifically programmed to run on wireless devices. Java MIDlets include add-ons, games, applications and utilities.

Since there are millions of Java developers worldwide, and the Java development tools are freely accessible, smartphone users can install thousands of third-party applications on their phones. Because of the way the OS architecture of most phones is built, these applications can access and use all of the data on the user's phone.