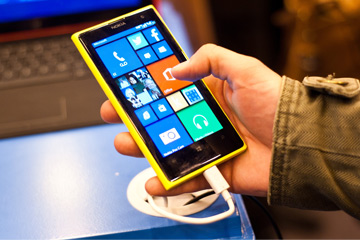 A man checks out the new Nokia Lumia 1020, which runs Windows Phone 8 and boasts a 41- megapixel camera, during London's Apps World exhibition in October 2013.
© Piero Cruciatti/Demotix/Corbis

The most important software in any smartphone is its operating system (OS). An operating system manages the hardware and software resources of smartphones. Some platforms cover the entire range of the software stack. Others may only include the lower levels (typically the kernel and middleware layers) and rely on additional software platforms to provide a user interface framework. We've added some snapshots of specific smartphone operating systems.

Designed primarily for touch-screen mobile devices, Android, or Droid, technology is the operating system that most mobile telephones used as of Comscore's February 2014 numbers. Developed by Google, most people consider the Droid technology revolutionary because its open source technology allows people to write program codes and applications for the operating system, which means Android is evolving constantly. Smartphone users can decide whether to download the applications. Moreover, Android operating systems can run multiple applications, allowing users to be multitasking mavens. And get this: Any hardware manufacturer is free to produce its own Android phone by using the operating system. In fact, many smartphone companies do just that. Android app’s store has hundreds of thousands of apps.

Apple is always innovating, and iOS allows iPhone screens to be used simply and logically. Touted by Apple as the “world’s most advance mobile operating system,” iOS supports more access from sports scores to restaurant recommendations. As of publication, its latest version iOS7 allows for automatic updates and a control center that gives users access to their most used features. It also makes surfing the net easier with an overhaul to the Safari browser.

Reviewers say that Windows Phone 8 (WP8) is as simple to use as iOS and as easy to customize as Android. Its crowning achievement is LiveTiles, which are programmed squares that users can rearrange on their screen to easily access the information they want. WP8 works well with other Microsoft products, including Office and Exchange. For those who do a lot of calling, connecting to Facebook and texting, WP8 may meet their needs.

At first glance, experts say, Ubuntu 13.10 Touch might seem like an ordinary operating system, but it’s not. Experts say Ubuntu Touch one of the easiest systems to use, allowing seamless navigation with multiple scopes. There are no hardware buttons on the bottom, for example. Instead, Ubuntu works from the edges. Developed by Canonical, the Ubuntu Touch allows users to unlock the phone from the right edge. You can swipe down from the top edge to access the phone’s indicators, including date, time, messages (from variety of sources, ie: Skype and Facebook) and wireless networks. The phone also makes it easy for people to organize and share photos. Every shot is automatically uploaded to a personal cloud account, which makes it available on all devices, including iOS, Android and Windows [sources: Ubuntu, Vaughan-Nichols].