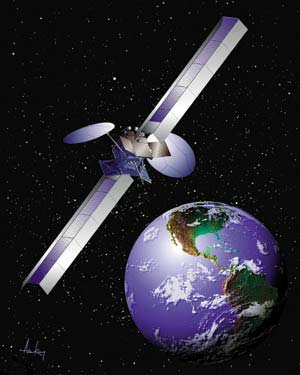 We all have our favorite radio stations that we preset into our car radios, flipping between them as we drive to and from work, on errands and around town. But when you travel too far away from the station, the signal breaks up and fades into static. Most radio signals can only travel about 30 or 40 miles (48 to 64 kilometers) from their source. On long trips, you might have to change radio stations every hour or so as the signals fade in and out. And it's not much fun scanning through static trying to find something -- anything -- to listen to.

Now, imagine a radio station that can broadcast its signal from more than 22,000 miles (35,000 kilometers) away and then come through on your car radio with complete clarity. You could drive from Tacoma, Wash., to Washington, D.C., without ever having to change the radio station! Not only would you never hear static interfering with your favorite tunes, but the music would be interrupted by few or no commercials.

XM Satellite Radio and Sirius Satellite Radio each launched such a service at the beginning of the 21st century. Satellite radio, also called digital radio, offers uninterrupted, near CD-quality music beamed to your radio from space.

In February 2007, XM Satellite Radio and Sirius Satellite Radio announced their plans to merge into a single company. XM and Sirius were both in debt, and believed a merger would quickly solve that problem. They thought that the merger would also lead to lower prices and more programming choices for consumers. Some people were skeptical about the two companies joining, though, fearing a monopoly would only reduce competition, raise prices and affect consumers poorly. Sirius and XM received approval from the U.S. Department of Justice, but the companies couldn't move until the FCC begrudgingly allowed the merger to go forward in July 2008. The new company goes by the name Sirius XM Radio.

Satellite radio is an idea over a decade in the making. In 1992, the U.S. Federal Communications Commission (FCC) allocated a spectrum in the "S" band (2.3 GHz) for nationwide broadcasting of satellite-based Digital Audio Radio Service (DARS). Only four companies applied for a license to broadcast over that band. The FCC gave licenses to two of these companies in 1997. CD Radio (later Sirius Satellite Radio) and American Mobile Radio (later XM Satellite Radio) paid more than $80 million each to use space in the S-band for digital satellite transmission.

At this time, there are two space-based radio broadcasters:

­ Satellite radio companies are comparing the significance of their service to the impact that cable TV had on television 30 years ago. Listeners aren't able to pick up local stations using satellite radio services, but they have access to hundreds of stations offering a variety of music genres. Each company has a different plan for its broadcasting system, but the systems do share similarities. Here are the key components of the two satellite radio systems:

Satellite radio works a lot like satellite TV -- you purchase a receiver and pay a monthly subscription fee for a certain number of channels. For the moment, there are slight variances in the three satellite radio companies' systems. In the next three sections, we will profile each of the companies and their current satellite radio services.

While XM Radio and Sirius have merged into a single company, the two services aren't fully integrated yet. Part of the reason for this is due to differences in hardware and software.

XM Radio uses two Boeing HS 702 satellites, appropriately nicknamed "Rock" and "Roll," and two BSS 702 satellites it calls "Rhythm" and "Blues," placed in parallel geostationary orbit, two at 85 degrees west longitude and the other two at 115 degrees west longitude. Geostationary Earth orbit (GEO) is about 22,223 miles (35,764 km) above Earth, and is the type of orbit most commonly used for communications satellites. The first XM satellite, "Rock," was launched on March 18, 2001, with "Roll" following on May 8 of the same year. A design flaw in the HS 702 satellite caused its solar panels to function inefficiently. XM launched "Rhythm" on February 28, 2005, and "Blues" on October 30, 2006, to replace the older satellites. Then XM Radio powered down "Rock" and "Roll." The older satellites remain in orbit and can serve as backups, if necessary.

XM Radio's ground station transmits a signal to its two active GEO satellites, which bounce the signals back down to radio receivers on the ground. The radio receivers are programmed to receive and unscramble the digital data signal, which contains more than 170 channels of digital audio. In addition to the encoded sound, the signal contains information about the broadcast. The song title, artist and genre of music are all displayed on the radio. In urban areas, where buildings can block out the satellite signal, XM's broadcasting system is supplemented by ground transmitters.

Currently, subscribers can receive the regular XM channel lineup for $12.95 per month. For that price, listeners get more than 170 channels of music, talk and news. They also get access to XM Radio online, a streaming audio service with more than 80 channels. Many of the channels have no commercials, and none of the channels have more than seven minutes of ads per hour. XM's content providers include USA Today, BBC, CNN, Sports Illustrated and The Weather Channel. The service bolsters that lineup with its own music channels.

The Sirius system is similar to that of XM. Programs are beamed to one of the three Sirius satellites -- the satellites then transmit the signal to the ground, where your radio receiver picks up one of the channels within the signal. Signals are also be beamed to ground repeaters for listeners in urban areas where the satellite signal can be interrupted.

Just like XM Radio, Sirius currently offers its regular subscription for $12.95 per month. Sirius produces car radios and home entertainment systems, as well as car and home kits for portable use. The Sirius receiver includes two parts: the antenna module and the receiver module. The antenna module picks up signals from the ground repeaters or the satellite, amplifies the signal and filters out any interference.­The signal is then passed on to the receiver module. Inside the receiver module is a chipset consisting of eight chips. The chipset converts the signals from 2.3 gigahertz (GHz) to a lower intermediate frequency. Sirius also offers an adapter that allows conventional car radios to receive satellite signals.

I Want My TV -- Siriusly

In March 2007, Sirius introduced a new service called Sirius Backseat TV. Sirius partnered with several car manufacturers to create a service that broadcasts programming from Nickelodeon, the Cartoon Network and the Disney Channel that televisions with special Sirius receivers can pick up. People riding in the front of the vehicle can still listen to other Sirius radio stations while the kids watch television in the back.

1worldspace will be able to broadcast to the majority of the world's population when its AmeriStar satellite is launched.
© 1worldspace

So far, 1worldspace has been the farthest-reaching company in the satellite radio industry. It put two of its three satellites, AfriStar and AsiaStar, in geostationary orbit before either of the other two companies launched one. AfriStar and AsiaStar were launched in October 1998 and March 2000, respectively. AmeriStar, which will offer service to South America and parts of Mexico, has not yet been launched. Each satellite transmits three signal beams, carrying more than 60 channels of programming, to three overlapping coverage areas of about 5.4 million square miles (14 million square kilometers) each. Each of the 1worldspace satellites' three beams can deliver more than 50 channels of crystal-clear audio and multimedia programming via the 1,467- to 1,492-megahertz (MHz) segment of the L-Band spectrum, which is allocated for digital audio broadcasting.

The United States is not currently part of 1worldspace's coverage area, although the company has invested in Sirius XM Radio and has an agreement with the company to share any technological developments. 1worldspace is going beyond one nation and eyeing world domination of the radio market. That might be overstating the company's intent a bit, but 1worldspace does plan to reach the corners of our world that most radio stations can't. There are millions of people living in 1worldspace's projected listening area who can't pick up a signal from a conventional radio station. 1worldspace says it has a potential audience of about 4.6 billion listeners spanning five continents.

1worldspace broadcasters uplink their signal to one of the two operational satellites through a centralized hub site or an individual feeder link station located within the global uplink beam. The satellite then transmits the signal in one, two or all three beams on each satellite. Receivers on the ground then pick up the signal and provide CD-quality sound through a detachable antenna.

1worldspace satellite receivers are capable of receiving data at a rate of 128 kilobits per second (Kbps). The receivers use the proprietary StarMan chipset, manufactured by STMicroelectronics, to receive digital signals from the satellites.

For more information on satellite radio and related topics, check out the links on the next page.