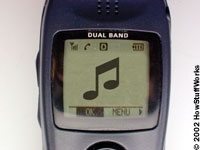 A ringtone version of your new favorite song does serve some purpose, of course -- it lets you distinguish your own phone's ring from other phones ringing around you -- but more than anything else, it's a chance to add personality to technology.

In this article, we'll see what ringtones are all about and we'll find out how you can add new tunes to your phone (if it's compatible). As we'll see, it's incredibly easy to find and add a song you like and load it up.

If you've read How Cell Phones Work, you know the central "brain" of a cell phone is a small microprocessor. Just like the microprocessor in a computer, this unit controls everything that the cell phone does, working from information stored in the phone's memory.

At its core, a ringtone is simply a computer program stored on the cell phone's memory chip. This program's sole purpose in life is to tell the microprocessor what the phone's speaker system should do when the phone's receiver picks up an incoming call.

Ringtone-capable phones already have a range of notes stored in memory (that is, they include information on speaker vibration frequencies that will produce particular tones). The ringtone program only has to tell the microprocessor which of these notes to play, in which order and at what speed. By adjusting these variables, the microprocessor can play an infinite number of ringtones.

The clearest example of this sort of programming language is the Ringing Tone Text Transfer Language (RTTTL) format, developed by Nokia. Here's a typical section of RTTTL code, with a description of what each bit means.

In order to enable a ringtone on your phone, you just have to get the appropriate program into the phone's memory. In the next section, we'll look at the different ways you can do this.

Shopping for a New Cell Phone?