What does a V-chip do and how does it work?

Browse the article What does a V-chip do and how does it work? 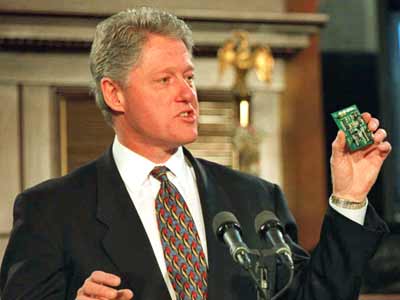 ­As of 1999, all new television sets (over 13 inches / 33 cm) sold in the United States have to contain a V-chip. The "V" stands for "violence," and the goal of the chip is to allow parents to choose the level of violent TV programming that will be allowed into the home.

The idea behind a V-chip is simple. TV shows have a signal embedded in them that gives the show a rating, and the chip can detect these ratings. The ratings that the FCC has settled on look like this:

­The ratings are encoded in what is called the "line 21 data area." If you have read the article How Television Works, then you know about the vertical retrace signal. This signal tells the TV to move the electron beam from the lower right to the upper left corner of the screen. Within this signal are horizontal retrace signals designed to keep the horizontal retrace circuit synchronized. The twenty-first line of horizontal retrace embedded within the vertical retrace area has been designated as a data area that is controlled by a standard called XDS. All sorts of things go inside this data area -- such as closed captioning information and the time of day -- as well as ratings information.

The V-chip simply decodes the line 21 data, compares it with the parent's allowed rating and then either blocks the signal or lets it through.  See the next page to learn more.