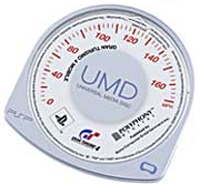 At the system's initial launch in Japan in December 2004, six games were available for the portable device: Ridge Racers, Armored Core - Formula Front, Minna no Golf Portable, Lumines, Mah-Jong Fight Club and Vampire Chronicle - The Chaos Tower. At the Tokyo Game Show, several other games were previewed, including another chapter in the Metal Gear franchise and more racing from the Need for Speed line.

There are over 75 games currently available or coming soon to the PSP, including entries from favorite franchises Grand Theft Auto and Twisted Metal. Included among several Electronic Artsreleases are PSP versions from the EA Sports line-up. The PSP will not be able to play PlayStation or PlayStation 2 games.

Calling the PSP a "portable entertainment platform" at the 2003 Electronic Entertainment Expo, Sony president and CEO Ken Kutaragi said, "Along with game applications, 'PSP' will have a huge potential for delivering other forms of entertainment as well as live entertainment through the network, anywhere, anytime. This is the 'Walkman' of the 21st century."

In addition to the USB 2.0 port, PSPs come equipped with a Memory Stick PRO Duo slot, an infrared port and standard wireless LAN capability. This allows PSP users to transport data and load new applications onto their systems. In addition to gaming, the PSP can play music and movies (on UMD) and store photos.