Browse the article How PlayStation Works 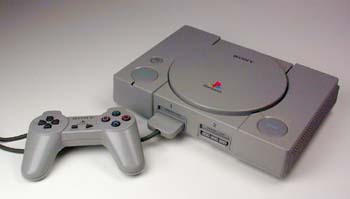 The Sony PlayStation (PSX) was once the dominant video game system. Although challenged by the incredible technical features of the Nintendo 64 and the next generation Sega Dreamcast at the time, the PlayStation was so popular that Sony estimated that one out of every four households in the United States had one.­­

In this edition of HowStuffWorks, you will learn about the development of the PSX, what's inside the box and how it all works together. You will also learn about the controller, including the popular Dual Shock version.

The History of PlayStation

In 1988, Sony entered into an agreement with Nintendo to develop a CD-ROM attachment, known as the Super Disc, for the soon-to-be released Super Nintendo. Due to many contractual and licensing problems, the Super Disc was never released. Instead, a modified version was introduced by Sony in 1991, in a system called the Play Station.

The original Play Station read these Super Discs, special interactive CDs based on technology developed by Sony and Phillips called CD-ROM/XA. This extension of the CD-ROM format allowed audio, video and computer data to be accessed simultaneously by the processor. The Play Station also read audio CDs, and had a cartridge port for accepting Super Nintendo game cartridges. The Play Station was envisioned as the core of a home multimedia center. Sony only manufactured about 200 of them before deciding to retool the design.

The new design, dubbed the PlayStation X, or PSX, dropped the Super Nintendo cartridge port and focused solely on CD-ROM-based games. The component hardware inside the console was revamped as well, to ensure an immersing and responsive gaming experience. Launched in Japan in December of 1994, and in the United States and Europe in September of 1995, the PlayStation quickly became the most popular system available. 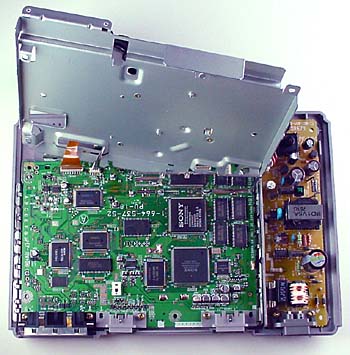 When you look inside a PlayStation, you can see the processor and memory chips.

Let's take a look at the components inside a PlayStation, and what their capabilities are. [Be sure to check out How Video Game Consoles Work first for a general introduction to game consoles.]

The CPU in the PSX is a RISC processor. RISC stands for reduced instruction set computer, and means that the instructions and computations performed by the processor are simpler and fewer. Also, RISC chips are superscalar -- they can perform multiple instructions at the same time. This combination of capabilities, performing multiple instructions simultaneously and completing each instruction faster because it is simpler, allows the CPU to perform better than many chips with a much faster clock speed.

To lower production costs, the CPU, graphics and audio processors are combined into a single application specific integrated circuit, or ASIC. Simply put, the ASIC is a customized chip created to manage all of the components that would otherwise be handled by three separate chips.

The PlayStation reads games from a CD-ROM/XA disc with a laser.

The games come on proprietary CD-ROM/XA discs that are read by laser, just like regular CDs. When a game is put in the console, the following happens:

Since all information is flushed from RAM when the power is turned off, you will lose any personal game data. But you can save it by using one of the special Flash memory cards. The card is inserted into one of the two slots on the front of the PSX, above the port for the controller. 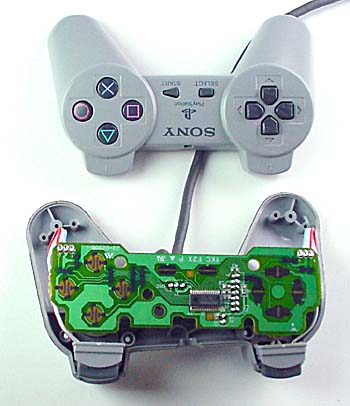 The innovative PlayStation controller attracted attention with its winged shape and its buttons.

The controller is the primary user interface for the PlayStation. And just as the gamepad that came with the original Nintendo Entertainment System was a radical departure from previous controllers, the PSX controller changed the rules again. With its winged shape and abundance of well-positioned buttons, it is user-friendly and yet powerful.

The standard PSX controller has 14 buttons! They include:

Although each button can be configured to perform a specific and distinctive action, they all work on the same principle. In essence, each button is a switch that completes a circuit when it is pressed. A small metal disk beneath the button is pushed into contact with two strips of conductive material on the circuit board inside the controller. While the metal disk is in contact, it conducts electricity between the two strips. The controller senses that the circuit is closed and sends that data to the PSX. The CPU compares that data with the instructions in the game software for that button, and triggers the appropriate response. There is also a metal disk under each arm of the directional pad. If you're playing a game in which pushing down on the directional pad causes the character to crouch, a similar string of connections is made from the time you push down on the pad to when the character crouches.

Newer Dual Shock PSX controllers have analog joysticks on them, as well as the standard buttons. These joysticks work in a completely different way from the buttons described above. Two potentiometers (variable resistors) are positioned at right angles to each other below the joystick. Current flows constantly through each one, but the amount of current is determined by the amount of resistance. Resistance is increased or decreased based on the position of the joystick. By monitoring the output of each potentiometer, the PSX can determine the exact angle at which the joystick is being held, and trigger the appropriate response based on that angle. In games that support them, analog features like these allow for amazing control over gameplay.

Another feature of the Dual Shock controller, actually the reason for its name, is force feedback. This feature provides a tactile stimulation to certain actions in a game. For example, in a racing game, you might feel a jarring vibration as your car slams into the wall.

The Dual Shock controller uses force feedback to simulate the action in the game.

Force feedback is actually accomplished through the use of a very common device, a simple electric motor. In the Dual Shock controller, two motors are used, one housed in each handgrip. The shaft of each motor holds an unbalanced weight. When power is supplied to the motor, it spins the weight. Because the weight is unbalanced, the motor tries to wobble. But since the motor is securely mounted inside the controller, the wobble translates into a shuddering vibration of the controller itself. Now let's take a closer look at how the controller talks to the PSX.

Here's what each pin does:

The games on the PSX are CD-ROM-based, so they are limited to a maximum size of 650 Mb. But this is a lot of space. In fact, most games do not use more than a fraction of it for the actual game. What can eat up the space are the incredible full motion video intros and intermissions that PlayStation games are known for.

There is a noticeable delay while the game is loaded from the CD, which you do not get in cartridge-based games. Of course, the trade-off for faster loading is a significantly smaller amount of storage on the cartridge.

Because they are black instead of the traditional silver, PSX CDs are very distinctive. But don't let that fool you. The CDs are just as susceptible to scratches and intense heat as normal audio CDs -- even more so in fact, since a scratch on a game CD can make it totally unusable.

The games available for the PlayStation cover all of the categories. It has, by far, the largest game library of any of the consoles on the market today. Game prices range from under $10, for certain preplayed titles, to over $50 for some of the hottest new games.

Special thanks to the staff at BuyRite Video for their assistance with the articles in this series.