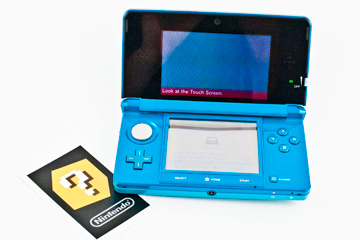 Back in the early 1990s, the term virtual reality became a buzz phrase. Two decades later, augmented reality appears to be following suit. The concept sounds like something out of a science fiction film -- using technology, we create an artificial layer on top of the real world around us. We fill this layer with everything from useful information to games. So while reality surrounds us, there is also a fantasy world generated by technology present.

The rise in popularity of smartphones has pushed research and development into augmented reality applications. There are smartphone apps that let you hold your phone's camera up to a restaurant in order to find out what the menu is like or how other people have rated the food, for example.

Nintendo pre-installs augmented reality software onto the 3DS. Fresh out of the box, you can play games that combine virtual elements with physical objects. Each 3DS comes with a pack of Nintendo cards. One of those cards has the familiar yellowish box with a question mark on it -- a staple in games like "Super Mario Bros."

Placing the card on a flat surface and activating the AR games menu item gets you started. The 3DS activates its rear-facing cameras. You point the cameras at the card. Once the 3DS identifies the card and judges your distance from it, you'll see a virtual, three-dimensional box pop up on the surface of the card as you look at the 3-D display.

You can interact with the virtual object in several ways. You can play a couple of different games that require you to move around and shoot virtual targets as you keep your cameras trained on the real card in front of you. There's also a program that lets you draw images, which the 3DS renders as an object with actual depth. It will look as if your drawing is standing up on the flat surface that supports the AR card.

Using both cameras, the 3DS can gauge the angle and distance of the card by comparing the two sets of images, much the same way as we perceive 3-D with our own eyes. As you move the 3DS around the card, the cameras detect the new angles and distances and the 3DS adjusts the rendering of the virtual objects to match the new position. Move too close or too far away and the 3DS warns you to adjust back to the optimal distance.

The AR games only work with specific images. You can't point the 3DS at a building and expect to have a virtual game pop up. The processors will only work with patterns they recognize, like the box with the question mark on it. If you lose the AR card, you can print out a replacement from Nintendo's Web site.