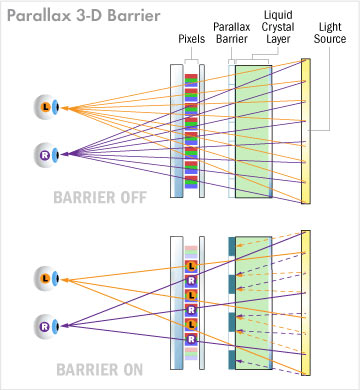 By directing light to each of your eyes, the parallax barrier allows Nintendo to create the illusion of depth on the 3DS screen.
© HowStuffWorks.com 2011

There are different ways to do achieve a three-dimensional effect. Anaglyph systems use two different colors of light -- usually red and blue -- and special glasses that block one set of images to an eye while allowing the other set to pass through. Polarized systems have special glasses that only let light aligned a particular way to pass through to reach your eyes. And active-shutter glasses have tiny LCD shutters that open and close in a pattern synchronized with a display. Each eye only sees one set of images and your brain does the rest of the work for the system.

But what about the 3DS? It doesn't use glasses. The secret of the 3-D power lies in the parallax barrier. The 3DS screen has a special layer on top of it that helps direct light in a particular way. The layer is a second liquid crystal display (LCD) in which the crystals can create barriers that channel light. When you turn the 3-D mode off on the 3DS, the crystals allow light to pass through freely so that both eyes receive the same image. By moving the switch up, the 3DS adjusts the placement and width of the crystals in the parallax barrier, sending a different set of images to each of your eyes.

Your brain takes the two sets of images and incorporates them into a single picture with depth. One disadvantage of this method is that the 3-D effect only works for a relatively narrow viewing angle. If you were to hold the 3DS too far to the left or right, you would begin to see a double set of images, which can be disorienting. The same is true for anyone trying to watch you play a game -- they may just end up with a headache.

Because of the nature of the 3DS, most people will find it natural to hold the device at the right distance to get the 3-D effect. If the 3DS were a television set, you'd have to sit in just the right spot to get the three-dimensional effect. And developers must design games with two sets of images to take advantage of the three-dimensional display -- that's why older DS and DSi games won't show up in 3-D.

The basis of the parallax barrier is the lenticular display. You may have seen postcards or pictures that have a special ridged surface on the top. When you tilt the picture back and forth, the images appear to move. The ridged surface directs light reflected by the picture to your eyes. There are actually several images on that one picture, it's just the ridged display only allows you to see one at a time. By tilting the picture quickly, you create the illusion that the image itself is animated.

The two cameras on the back of the 3DS allow you to take 3-D photographs. Each camera captures an image. The 3DS combines the two images and displays them using the 3-D technology. You can store these images on an SD card. But don't expect to view pictures of your friends in 3-D on other devices -- they'll only be in 3-D on the 3DS.

Next, we'll look at how the 3DS can create a layer of games around you in the real world.