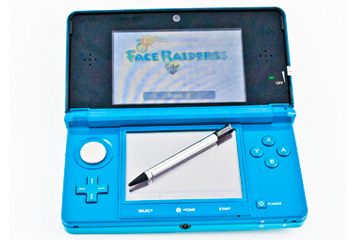 The Nintendo 3DS comes with a telescoping stylus that fits snugly in the back of the device.
© HowStuffWorks.com 2011

Compare the 3DS to an older DS or a DS Lite and you'll see it's a bit bigger, thicker and heavier than its older siblings. But the Nintendo DSi XL remains the biggest kid on the block. Here's a rundown on the physical features of the 3DS:

The 3DS shares many of its predecessors' features. You can download games over WiFi or buy physical cartridges for the 3DS. It has an 802.11 WiFi connection as well as Nintendo's proprietary WiFi service. It has a microphone that lets you record sounds for playback -- it also comes into play with some games where sound is an interactive part of the experience. You can store information on an SD card and even transfer content like music and photos to other devices, though there are some limitations on the content you can share.

The 3DS has a standard 3.5-millimeter headphone jack, and a physical sliding control for volume. There are also sliders to control the 3-D effect on the upper screen and a switch to turn the WiFi on or off. On the back of the device, you'll find a storage space for the 3DS's telescoping stylus, a port for the 3DS's AC charging cable and an infrared transceiver panel.

Like the other members of the DS family, the 3DS has a resistive touch-screen display. That means the screen reacts to pressure. Inside the display are two special layers that detect touch. One layer is conductive while the other is resistive. When the two layers come into contact with each other, the 3DS detects the change in the electrical field and interprets the touch as a command. Technically, any pressure on the screen will work but Nintendo warns users to limit themselves to using the official Nintendo stylus with the touch-screen display.

The stylus and touch-screen interface aren't the only way you can control games with the 3DS. It also has a direction pad, a new circle pad that can act as a joystick or camera control interface for certain applications, four controller buttons and dedicated buttons for home, start and select features. The control pad and buttons will look familiar to any Nintendo fan -- they have their roots in the old Super Nintendo Entertainment System controller.

The 3DS has three cameras. One faces the player. The other two are on the back of the 3DS -- you can use them to take pictures in 3-D. We'll dive into the three-dimensional world of the 3DS a little later.