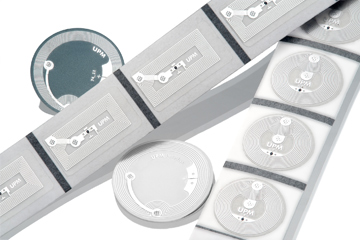 NFC tags are programmed with just about any sort of information and then plopped into almost any product, letting you read them with a smartphone or another NFC-capable device.
Courtesy NFC Forum

Soon, your entire world could become a digitally immersive experience. Imagine it -- a physical version of the Web, one in which everything (and maybe everyone) has a digital signature. You'll have instant access to information about products, services, landmarks and even people, all thanks to near field communication (NFC) technologyand the smart tags that work with NFC.

NFC isn't a fundamentally groundbreaking technology. Like Bluetooth and WiFi, it's a wireless radio communications standard. In the wireless world, NFC's closest relative is actually RFID (radio frequency identification). Retailers and parcel shipping companies in particular love RFID as a way to keep tabs on inventory supplies and shipments. You can read all about it in How RFID Works.

NFC is a lot like RFID, only it's a more up-close-and-personal type of wireless. Whereas RFID can be used from a distance, NFC readers work at a maximum range of about 4 inches (10 centimeters). NFC readers aren't suitable for RFID-style inventory tracking; their range is too short. So NFC tags will appear in a flood of products and promotional items where bits of digitized information might come in handy.

Unlike RFID versions, NFC readers aren't always specialized devices. As a matter of fact, NFC chips will be incorporated right into your smartphone's circuitry. About 20 percent of phones worldwide might have NFC capabilities by 2014 [source: Juniper]. With the widespread reach of NFC phones, NFC tags could one day become as commonplace as bar codes.

For example, a smart tag could be embedded into a political flyer. Tap the tag, and you're directed to a Web site touting a candidate's credentials. At the same time, you also instantly receive a snappy biography in the form of a text file and image.

Or, at your favorite restaurants, you can touch your phone to an NFC tagged menu and voila -- you have the entire menu on your phone, along with nutritional information and mouth-watering descriptions of the ingredients in your favorite dishes.

When it comes to the potential uses of NFC tags, there are no limits. But what exactly gives an NFC tag its enchanting powers? On the next page, we'll tell you. 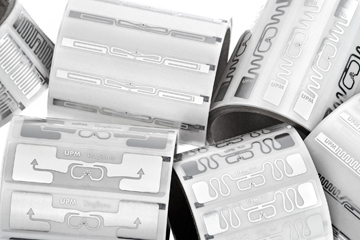 The only real difference is that NFC tags are formatted to be used with NFC systems. And they're small and cheap enough to integrate into all sorts of products: posters promoting circus tour dates, ski lift passes, stickers, business cards, prescription bottles and even ruggedized labels meant for outdoor use.

There are four flavors of NFC tags, types 1 through type 4, all featuring different capacities and data transfer speeds. Type 1 tags typically store 96 bytes and work at 106 Kbps (kilobits per second); Type 4, the biggest and fastest, store up to 32 KB and work at speeds of up to 424 Kbps [source: Radio Electronics].

Anyone can buy blank NFC tags and then write customized data to them. Type 1 and Type 2 tags can be written to multiple times. These tags can also be permanently locked, or encrypted, so that no one can manipulate the data. Type 3 and Type 4 tags can only be written to once, like a CD or a DVD, and they lack the security of types 1 and 2.

Tags with higher memory and larger antennas are bigger in physical size. Generally, tag size ranges from just a centimeter or two to a few inches.

Memory capacity and speed dictate cost, which is a critical consideration for companies that want to spread information far and wide through smart posters or flyers. Right now, tags cost around 30 cents apiece even in bulk, but the price should continue to drop until they're only a few pennies each [source: NFC Rumors], allowing for rapid dissemination of these tags in innumerable places and things.

Soon, it's likely that NFC tags will be just about everywhere, letting you tap your way across your newly digitized world. If you want to know more about the coming new NFC world order, check out How Near Field Communication Works. You'll be better prepared to handle the onslaught of your NFC-enabled neighborhood and ready to rock out with your NFC smartphone.