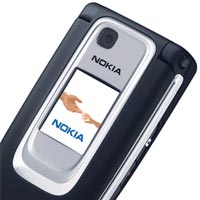 The Nokia 6131 was the first fully integrated mobile-payment cell phone.

Radio technology will soon do another consolidating act and remove an apparently extraneous "device" from your pocket: Your wallet. Or at least your credit card. If you're the type who never leaves home without your cell phone, you'll automatically have a credit card or debit card with you wherever you go thanks to an improvement on standard RFID technology called near-field communication, or NFC.

The NFC mobile-payment application is currently in trials in the United States, Germany, Finland, the Netherlands and a few other countries, with transportation ticketing as a primary use (think SpeedPass on a cell phone). The idea is that you just touch your phone to an NFC reader (or bring it to within a few centimeters), and it acts just like the credit card or debit card you use right now. A mobile-payment-enabled phone is associated with a bank or credit-card company just like it's associated with a phone-service provider. The technology is similar to the RFID (radio frequency identification) transmitters used in contactless credit cards (see How Blink Technology Works), except that NFC chips allow for two-way communication instead of only one way, which is supposed to make for a more secure payment method.

The technology behind NFC, like RFID, uses inductive coupling to transfer data. Induction occurs when a wire (or any other conductor of electricity) passes through a magnetic field, generating an electric current in the wire. It's similar to the principal of electromagnetism -- that passing an electric current through a coil of wire will generate a magnetic field -- only in reverse. An NFC chip has a coil of wire built into it, much like an RFID chip. When an NFC-equipped cell phone gets to within a few centimeters of an NFC-equipped payment station, which is generating a magnetic field and also has a coil of wire inside, an electric current jumps between the two coils of wire, signaling data-carrying, short-range radio waves to pass between the two devices.

­Unlike the RFID tags in contactless credit cards, which only send information when asked for it, an NFC chip can also receive information. So when an NFC phone gets close to an NFC payment station, it can have a two-way conversation with the payment station. Instead of simply sending your name and credit card number when the data is requested via the circuit, the chip can have a conversation with the chip in the requesting device. It can say, for instance, "Not yet -- wait until my owner enters a password on my keypad." The pay station will then say, for instance, "Okay, I'll wait," and the devices will keep the connection open until the phone approves the transaction and sends the data.

Nokia revealed the first fully integrated NFC phone, the Nokia 6131 NFC, at the 2007 Consumer Electronics Show (CES) in Las Vegas. At CES, Nokia was in a perfect position to show off what some in the industry consider to be the myriad other applications for an NFC phone -- like sucking data off an NFC-equipped business card and downloading data from an NFC-equipped kiosk. The NFC chip is embedded underneath the cover of the phone. According to the NFC forum, you could also use an NFC phone to unlock the door to your house and synch your phone calendar with your PC calendar.

The 6131 NFC is in trials in New York City as of January 2007. Nokia says it should available to consumers by March. No word yet on which stores or transportation venues will be equipped with the sta­ndardized NFC readers.

If you're interested in where cell phone technology is headed, then click here to read about the future of smartphones.

For more information on mobile phones as payment methods and other NFC applications, check out the next page.­